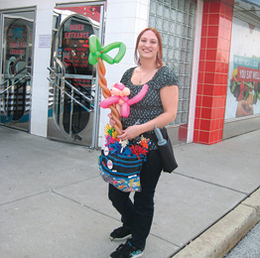 Some so-called balloon artists can twist up an inflated dog or perhaps a sword, but to Blackwood’s Jack Anderson, owner of Family Fun Entertainment, that stuff is mere child’s play.

“We make Ninja Turtles and superheroes, characters that kids would recognize immediately,” he says. “We also do it in a fun interactive way where the kids are being entertained. It’s not a show; it’s an activity.” With one-hour parties starting at $160, the pay for such balloon artistry is no lightweight affair; but to drum up gigs for himself (and his fellow balloon makers, magicians and face painters) Anderson is constantly performing at South Jersey restaurants. We asked Anderson—a.k.a. Jack the Balloon Man—and his freelance associate Gina Williams—better known as Gina the Balloon Girl—what it takes to blow up in the balloon business.

SOUTH JERSEY?BIZ: How did you get into this line of work?
Jack Anderson: At a concert a woman offered to make balloons for my kids. And I thought, “That’s really cool. I want to learn to do that.” So I found a beginner’s guide. I was a headhunter in the mortgage and banking industry at the time, and the jobs I was doing were being gobbled up by the Internet—Jobs.com and Monster.com.
I was doing the balloons on the side, and it exploded. I couldn’t keep up; I kept getting calls to do parties. So finally I quit my job and became a balloon artist in 1999.

SJB: How’s business?
JA: It’s taken us places we would have never imagined. The financial aspect is very good and even in a down economy we just had our best November, December and January ever. I think the reason is, people will never stop spending money on their kids. But it takes a bit of creative marketing and it’s a lot of hard work. We do a lot of restaurants and we go over to the tables and introduce ourselves. And that’s how we get a good two-thirds of our business.

SJB: What business lessons have you learned from this job?
Gina Williams: Trying to be the best at what you do is super important, because if someone else is doing what you’re doing, and they’re not as good and cost twice as much money, that can be your job. It’s very important to give people what they want and at a fair price.
JA: You’ll never make everybody happy. The proper amount of balloons to make is one more…. You’ve just got to grin and bear it. But it’s rare to have a bad day when you get to make balloons for kids.

SJB: Pardon the pun, but do you two bounce ideas off one another?
JA: If we’re working a job together, we can help polish each other’s ideas. You do get to talk shop, and no one really understands the ins and outs of the business like the entertainers who go work on the living room circuit.

SJB: What’s the secret to success in your business?
JA: My problem isn’t getting business: it’s finding people to do the job. We turn down almost as much work as we take, because I don’t have any run-of-the-mill, generic balloon artists or face painters that work for me. I’ve seen a lot of average entertainment out there, people making the same tired balloons and tired gags they’ve been doing for 20 years, and it just doesn’t sell. I want creative, enthusiastic, fun, energetic people.
GW: I’ve learned that networking is really important. You just have to put yourself out there and always be handing out cards. Also, you definitely have to have personality. You can’t just stand up in front of 20 kids and make balloons. In addition, you have to actually like kids!

SJB: What’s the strangest request you’ve had?
GW: I have one little friend Brianna who’s 13 now and I’ve been making balloons for her since she was 7. She always tries to stump me with things like a caterpillar wearing a sombrero. Also, kids will ask for Justin Bieber. How are you going to make that? You just have to do your best.

Photo: Gina Williams, a.k.a. Gina the Balloon Girl, makes a monkey on a palm tree before a shift entertaining kids at Silver Diner in Cherry Hill.