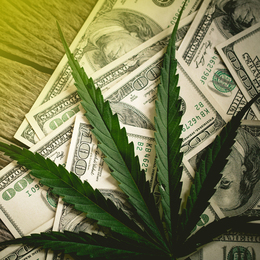 
by Jennifer Lesser
The medicinal marijuana industry is worth more than $1 billion, and as more and more dispensaries are opening their doors throughout New Jersey, it’s increasingly becoming a new cash crop for the local economy. From new jobs to tax revenue, New Jersey’s Medicinal Marijuana Program (NJMMP) is impacting an array of industries—and the potential seems limitless, particularly if full legalization eventually happens in the Garden State.

New Jersey’s New Medical Marijuana Law
Earlier this summer, Gov. Phil Murphy signed a broad new medical marijuana law in efforts to expand the state’s medical marijuana program, with new provisions including home delivery, permitting physician assistants and advanced practice nurses to authorize medical cannabis, and expanding the list of qualifying conditions. And all of this means lots of new employment issues that South Jersey’s business owners now need to take into consideration. “This new law makes it crystal clear that employers can not take adverse employment action for employees solely for being a patient using medical marijuana,” explains Jeff Brown, assistant commissioner for the medicinal marijuana program at the New Jersey Department of Health (DOH). “If an employee fails a drug test for marijuana, but can prove they’re a patient with a prescription, businesses are now legally required to take that into consideration.”

However, the major caveat for employers to keep in mind is that they are not legally required to allow employees to medicate during work hours or arrive to work under the influence. The new law lowers the threshold for a prescription from debilitating illnesses like cancer to an array of other qualifying conditions, such as chronic pain, PTSD or seizures. “What the new law does is put medical cannabis on par with other medications,” explains Doug Diaz, partner at Archer and Greiner and member of the firm’s labor and employment department. “But at the same time, you can’t have somebody in a position where they’re operating heavy machinery being under the influence during work hours.”

Business owners in certain industries are also dealing with some uncertainty due to the fact that marijuana is still illegal under federal law. “Employers once saw that positive test and the case was closed … but it doesn’t work that way anymore,” Diaz adds. “With all of these changes, employers need to specifically revise any drug testing policies they have, particularly as it relates to safety-sensitive industries.” The state’s trucking industry, for example, is subject to regulation under the Department of Transportation and therefore has to follow the federal government’s zero tolerance policy on the use of marijuana, he notes.
The Growth of the Industry
Since the governor took office, the NJMMP has reached triple the amount of patients—which now surpasses 51,000—while almost doubling the number of participating physicians to1,000. The DOH is currently seeking applicants to operate up to 24 additional Alternative Treatment Centers (ATCs), with up to seven planned for the southern half of the state. According to Brown, the DOH has facilitated this growth in a number of ways, including providing patients with mobile access to the registry, approving new forms of cannabis such as concentrated oils, reducing wait times for new cards, cutting registration fees in half and expanding eligibility for reduced fees for veterans, residents requiring government assistance and seniors.

“Our state already has such a strong health care industry, and there’s seemingly endless potential for research, collaboration and innovation as we continue to discover new products and treatments,” he adds. “A lot of people focus solely on the ATCs, but there really are so many opportunities that businesses can participate in… and the new law means that all businesses will now be affected by this industry, whether they want to be involved in medical cannabis or not.”

One of the six original licensed ATCs in the state, Compassionate Care Foundation (CCF) is a nonprofit organization that has been cultivating, processing and dispensing medicinal cannabis to qualifying patients and their caregivers since2013. CCF is currently serving more than 5,000 active patients. According to Cady Riley, general manager, organizations like CCF are striving to not only provide treatment options for patients who need it, but also to actively participate in their surrounding communities and help bolster the local economy.

“I’ve seen firsthand the synergy created between our facility and [the] surrounding community; we often work hand-in-hand with local third-party contractors, vendors and various agencies—and as our operations have continuedto grow, so have theirs,” she says. “With access to medicinal cannabis, patients have reported greater pain relief and efficacy in combating or controlling debilitating symptoms, and this allows for improved patronage and participation in the workforce and social economy.”

The Economic Impact of Medical Cannabis
There’s no question that the industry is also creating new employment opportunities for state residents—in fact, some universities are starting to implement cannabis programs to meet the increasing demand. Stockton University is the first in the state to offer a minor in cannabis studies, as well as a new online certificate in cannabis studies. According to Peter Baratta, chief planning officer for Stockton, the program covers the business, health and legal aspects of the growing cannabis industry and has attracted students from the health sciences, criminal justice, social work and legal fields.
“It’s important for the larger business community to understand that there’s a ton of ancillary services to support ATCs and the medical cannabis industry,” Brown asserts. Among the industries that have experienced either direct or indirect growth due to the medical marijuana industry, he says, are electrical, real estate and construction in order to help build and maintain new facilities, in addition to fields like legal, banking and science that ATCs rely on in order to conduct their business. “We’re seeing an increasing demand for people to fill these jobs, and universities like Stockton are starting to respond by creating specific training programs— and I think other colleges will likely follow suit,” he says.

Riley agrees that the medicinal cannabis industry is founded on a specialized skill set of professionals and entrepreneurs alike, but its expansion is creating an array of employment opportunities for local residents and fostering growth in industries across the state. “While operations rely on focused horticultural and scientific expertise, it’s also dependent on auxiliary industries such as legal, financial and specialized trades, as well as participation and cooperation of local municipalities,” she adds. “The complexity of adhering to regulatory authorities while remaining on the pulse of state, industry and scientific evidence-based literature creates a diversity of medicinal cannabis-focused positions within these specialties.”

Another of the state’s original six facilities, Curaleaf cultivates and processes medicinal marijuana and maintains a more than 6,000-square-foot dispensary in Bellmawr—the largest on the East Coast. Led by a management team with backgrounds in health care, retail, nonprofit and financial services, Curaleaf develops safe, effective and innovative medical marijuana products, in addition to supporting clinical trials that advance research focused on new uses for medical marijuana.

According to Brian Kiniry, senior vice president of East Coast operations and interim president of Curaleaf New Jersey, Curaleaf currently employs approximately 90 people with plans to hire more as the organization continues to grow, and it also continues to expand its footprint in New Jersey with new and larger facilities. “It’s important for us not just to contribute to the economy through direct job creation and tax revenue, but by impacting the state through new construction, encouraging our employees to support businesses within the community, and donating to local charities,” he adds.

The Potential for Full Legalization
As more and more New Jersey patients are turning to the use of medical cannabis, it leaves many wondering how the potential for full legalization could impact South Jersey’s economy—and its residents. “If adult [recreational] use were to become legal in New Jersey, we would see more focused specialties. … Better access to auxiliary services such as banking and financing will attract a wide range of operators and economic opportunities, thus a higher generation of revenue for the state through sales tax and licensing fees,” Riley concludes. For now, though, industry experts seem to be in agreement that the continued growth of this lucrative industry for our state should remain slow and steady.

“Adult use legalization would certainly mean more dispensaries, more jobs and more tax revenues, and we support our local elected officials as they smartly and slowly facilitate the growth of the industry,” Kiniry says.

“Gov. Murphy and his administration have helped the program evolve through improved patient access and awareness. There’s a compassion and empathy that resonates through the NJMMP, and it can be observed at every level,” Riley concludes. “The more patients we’re able to serve and educate, the quicker we will recognize the economic impact.”