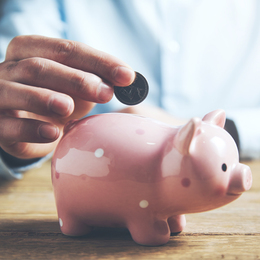 Banking on Better Pay
The new bill to increase the minimum wage to $15 has plenty of optimism surrounding it, but there is just as much uncertainty.

Anyone who has spent any time in New Jersey knows the state has a penchant for standing out in the crowd. So it should come as no surprise that when Gov. Phil Murphy signed the minimum wage bill on Feb. 4 that effectively raised the state’s minimum wage from $8.85 an hour to $15 for most workers by 2024, it made New Jersey a leader in the movement to match wages with the cost of living.

“It is a responsible and progressive plan that will put New Jersey in the forefront of the national movement to build a high wage economy,” says Senate President Steve Sweeney, in a recent statement regarding the increase. “It will provide gradual, steady increases over a number of years that would reach $15 by 2024 for the vast majority of minimum wage workers, with moderated increases for a number of job sectors. It recognizes the unique circumstances of the state’s agriculture industry and small businesses and it includes special provisions that support job training and jobs for the disabled.”

Upon signing the bill, Gov. Murphy released a statement saying he hopes the wage change will transform the lives of thousands of New Jersey residents for the better.

“For far too long, too many of our fellow New Jerseyans have been struggling to survive on wages that have not kept up with the cost of living,” he says. “I am incredibly proud to sign legislation that raises the minimum wage to $15 per hour, ensuring that the most vulnerable among us will have the means to put food on the table, while growing our economy and addressing priorities of the small business community.”

New Jersey is actually the fourth state to join the $15 an hourminimum wage ranks—California, Massachusetts and New York have already signed similar bills. But because the increases are so new—2016 is when they were first introduced in California and New York, and 2018 in Massachusetts—just how effective, or ineffective, the increases are remains to be seen. The hope, certainly, at least in New Jersey, is that with a higher wage, workers will be able to better support their families, and their state.

“The pros of the increase are that in a state like New Jersey, where the cost of living is high, employees will be on a path toward earning more of a living wage,” says David A. Rapuano, partner at the firm Archer Law and member of the firm’s labor and employment law group. “It is possible that the increase in wages for a substantial portion of the workforce will have benefits to the local economy, such as through increased purchasing power.

“From an employer’s perspective, having this apply across the board to most New Jersey employers, all businesses will be in the same boat in terms of competing for workers at the lower end of the pay spectrum,” he continues. “Further, paying employees a higher wage may have positive effects on employee retention and status.”

Despite the hopeful gains of the increase, there are definitely just as many concerns.

“Some are concerned the bill goes too far too quickly,” says Jennifer Laver, partner at law firm Weber Gallagher. “There is concern that the legislation puts too much stress on small businesses, forcing them to raise prices, cut hours, slash benefits or let employees go.

“These concerns would then lead to rising costs that would affect the most vulnerable citizens for whom the bill was created to protect,” she continues. “While the bill does note that small business employees or seasonal workers won’t reach the minimum wage of $15 until 2026, many feel that the two years won’t make a significant difference.

“Even more concerning is that this will not only increase the minimum wage for low earners, but those already making minimum wage will demand a higher pay based on the increase to those with less experience, qualification or time with the company,” Laver adds. “Employers won’t be forced just to increase a portion of their workforce but across the board.”

From an employment standpoint, over 60 percent of the members of the Southern New Jersey Development Council (SNJDC) believe the increase will negatively impact businesses, according to SNJDC President Marlene Asselta.

That’s not to say the SNJDC and its members don’t applaud the changes the state is looking to make by incorporating the bill. It’s simply that all possible outcomes should be taken seriously.

“The Southern New Jersey Development Council, with our 300-plus members, can see both the positive and negative impact that increasing the minimum wage, as currently drafted, will have on the economy of Southern New Jersey,” Asselta says. “One major concern is that businesses will be forced to reduce staff, hours and benefits to absorb the added costs ofthe associated wage hike; however, the business owner will be able to invest in its workforce and be rewarded with higher employee retention and a long-term employee.

“The phase-in of the increases will allow businesses to better plan for how they will address the costs as well asquantify the impact of the proposed wage increase,” she continues. “On the employee side, a wage increase would put more money into the consumerism stream.”

Of course, the bill is not something that can simply be put into place and allowed to grow on its own, Asselta adds.

“In an effort to protect and preserve the state’s economy, there must be a mechanism by which the state can adjust the minimum wage if it becomes a drag on the economy or during a major economic downturn impacting our state’s economy,” she says.

Though it may take until the bill is fully enacted in 2024 to see the full implications of the increase, the simple implementation of it may be more than some businesses can bear, Laver adds.

“The increase could become too expensive for some business owners to remain open, or in the alternative, it could create the need to increase the cost, making items sold in New Jersey more expensive,” she says.

Michael Bigwood Jr., owner of Bigwood’s Custom Painting, which specializes in commercial painting in South Jersey, agrees. With the wage increase, not only does Bigwood stand to see changes coming to his own small business, but the businesses he works with as well.

“Overall, I think this wage hike would hurt small businesses and would hurt job growth,” he says. “Small businesses will not be able to keep up with the costs associated, and some may fold up shop or move out of state. … I have a hard time seeing this as a positive impact as abusiness owner.”

With the bill still in its infancy there is understandably plenty of uncertainty surrounding it. Though the goal is to do what is best for the state, only time will tell if taking this measure will help the one million residents it is estimated to and bolster the state’s economy the way it is intended to. One thing is for certain—the rest of the country will be keeping an eye on New Jersey as an example of what to do, or what not to do, with its own future wages.