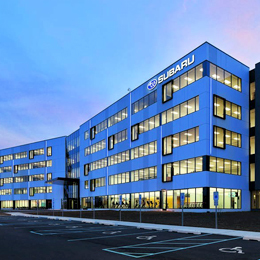 City on the Rise
Big businesses are looking to thrive in Camden where economic growth is coming to fruition on the waterfront and beyond.


by Lauren Kubiak
A city formerly controlled by its crime is slowly making its way back to the top in an effort to provide more businesses and economic support to Camden. A Grow New Jersey incentive is attracting companies to stay in the state due to its tax credit program.

One company recently moved its corporate headquarters to Camden not solely because of the Grow New Jersey program, but because it wanted to be a part of Camden’s transformation. Tom Doll, president and CEO of Subaru of America revealed his excitement over the big move, citing the company’s “Love Promise” campaign, a commitment to being a positive influence on the communities it serves.

“With our vision of our Love Promise and what we do in our local communities where our retailers operate, we wanted to do the same thing for our area in our neck of the woods which is South Jersey and in particular, the city of Camden,” he says.

Several other companies are progressing into Camden and teaming up with local non-profits, donating funds and creating partner projects to revitalize the city.

Making an impact
The new Subaru headquarters building is a 250,000-square-foot facility and across the street is the company’s National Service Training Center, the two connected by apedestrian bridge for employees.

Having been in the city since May, Subaru is already having an economic impact on Camden. The building serves as a 24-hour operation with hundreds of employees. When it’s time for the workers to eat at a late hour—or even in the afternoon—they utilize Camden’s restaurants and eateries; trying as many local services as possible.

As new companies find their way to Camden, older ones equally stimulate economy in the city. The South Jersey Port Corporation is celebrating its 50th year as a port facility for South Jersey. The agency, which manages marine terminals for seven South Jersey counties, is producing thousands of jobs in the city from ship workers to truck delivery.

“So it’s 2.2 miles [of the] Camden Port district between the Balzano and Broadway terminals. Because of the port and the port partners and those other businesses, those industrial/commercial businesses that exist, there’s a lot of economic value happening right here,” says Jay Jones, acting executive director at South Jersey Port Corporation.

Jones adds that although the waterfront does provide significant economic value to the city from Adventure Aquarium, parks, BB&T Pavilion and entertainment, there are other businesses in the city making it profitable.

The port partners with companies such as Holtec, an energy sector company that brings manufacturing and intellectual engineering development into the city.

“We’re just [enhancing] and growing all our partners that we have and we’ve been working to enhance and grow those partnerships that grow employment and to increase the cargo,” Jones says. “Camden enjoys the Delaware River, which is a highway to a global market. It’s a valuable resource. So there’s lots of businesses that are within or around ports because of that value of having intermobile—where rail, highway and river all come together.”

Building the community
For most of these large corporations, being a part of the community and finding new ways to lend a hand is how they’re making Camden a lasting home.

NFI Industries is currently building its new headquarters on the waterfront. The logistics provider chose Camden knowing it will help the company in the long run. “We have deep roots in South Jersey and many of our employees live in the surrounding communities, so it was important to us to find a location where they can retain those jobs and the company can continue to grow,” says Jeff Brown, vice chairman and president of NFI Industries.

The company is teaming up with theMichaels Organization and Connor Strong to build an 18-floor facility—the tallest building in Camden—that not only integrates employees from all over South Jersey, but puts forth new projects to enhance the waterfront.

While these companies want a location that helps them flourish, they also find it essential to give back to the place that’s been giving them that growth. For NFI, Subaru and American Water, among others, donating time and money is what makes it all worthwhile.

American Water recently awarded the Cramer Hill neighborhood in Camden a nearly $1 million grant to revitalize the area. It’s the continuation of the Cramer Hill NOW! project that will repair homes, improve parks and set in place a flooding mitigation program.

“It’s really a lot more than [this] building, right? It’s really becoming [a] bigger part of the community. So we’re looking at different ways that we can make our mark within the city of Camden and help to be able to continue to work on our revitalization efforts that the city is going through right now,” says Yimi Kierman, senior project manager at American Water.

American Water and Subaru have astrong focus on getting youth involved with STEM programs in the city. Subaru partners with Girls Inc. to introduce STEM and gives hands-on learning experiences to younger girls.

Of the many campaigns and partnerships in Camden, Subaru wants to continue its efforts to build the city. “We want to fill a need. We don’t want to just do programs we think are important because if nobody needs them then they’re not important to anybody,” says Sandy Capell, philanthropy and corporate responsibility manager at Subaru. “What are the needs and how can we work them to fill those needs in a way that makes sense for Subaru too.”

Cooper’s Ferry is a big player in Camden’s uprising by working with business and elected leaders in the county. Kris Kolluri, president and CEO of Cooper’s Ferry, mentions the K-12 school system has never been stronger in the last few decades. Additionally, there is a lot of improvement with employment opportunities for residents in the city.

“Almost every neighborhood in the city of Camden is benefiting from investment in parks, improvement of roads and the housing development that is happening all over the city of Camden,” Kollurisays. “Our focus is on this idea that Mayor [Frank] Moran talks about all the time which is inclusive prosperity. Our belief is that all neighborhoods in the city deserve an opportunity to grow and we strongly believe that this is just the beginning of the process.”

A newer company founded about four years ago, recently rebranded its name to accommodate small businesses when bigger businesses started coming to town.

Formerly known as the Camden Business and Contractors Association, the Camden Business Association (CBA) is focusing on all retail and storefront businesses. Its three-pronged approach—training, education and engagement (TEE)—with the help of collaborations and partnerships will build these aspects in the community, says Ray Jones, president of CBA.

Breaking roadblocks
Bringing new organizations and new employees can only amount to one problem: traffic. As these new corporations put up their walls, not only will hundreds upon hundreds of new commuters be traveling to the city, but tourism will follow.

Fortunately for Camden, government officials are working on ways to relieve the headache of traffic by developing construction plans and grants for traffic improvements. “The rush hour that you would expect leaving a concert is something that we are seeing and expecting could be similar at 5 p.m. every day of the week,” Bill Moen, Camden County freeholder, says.

One solution? Increasing public transportation use. Moen says that local leaders are advocating for the construction of a Glassboro-Camden rail line stopping at 10 municipalities between Glassboro and Camden.

Once traffic is out of the way, Moen believes there’s going to be a huge need for residential housing in the city for workers who are interested in living there. A new complex built in Camden, 11 Cooper, is the first market rate housing complex in Camden in 50 years. And coming from a resident’s point of view, Moen knows how important it will be to gain that housing in the city.

“I think it’s really impressive to see how many small businesses and how many entrepreneurs are interested in coming here to invest in the city and are realizing the benefit that exists here,” he says. “To work with some of the larger anchor institutions that have either relocated here already or that will be coming in the next few months and years, and I would encourage other entrepreneurs calling Camden home too.”

What Businesses Are Saying
SALVATION ARMY KROC CENTER
Benjamin Ovadia, development manager
“City and state government worked together to help bring the Kroc Center to Camden and we continue to feel the support of local government. The best part of having a business in Camden is knowing we are a part of the trans- formation that is occurring. The landscape of Camden is changing and so are the lives of the residents. Camden is a great community and people from outside of the city are experiencing that when they visit our center. Camden residents have embraced us and we would not want to be located anywhere else.”

BB&T BANK
Chris Warren, senior vice president and market president
“BB&T was originally attracted to Camden by the obvious potential the city has in terms of economic growth and development. The economic renaissance is having a very positive impact on all businesses in the city. The proximity to the port and Philadelphia are just two factors that make Camden a perfect location for a bank that is committed to fueling growth and prosperity.”
HOPEWORKS ‘N CAMDEN
Dan Rhoton, executive director
“Hopeworks was founded by three Camden organizations. It was always founded to be in
Camden. Camden, and its young people, are our business. They are the reason we are successful.”
URBANPROMISE
Toni Farmer, director of development and marketing
“Camden has come so far. The landscape is changing fast here and there is positive energy in the air for the first time in many years. UrbanPromise is excited to be raising a generation of leaders from Camden who will help restore their own city. Economically and visually, Camden is on the rise.”

CITY INVINCIBLE
Angelo Alberto, president and CEO
“We were really attracted by all of the redevelopment going on in Camden, as well as the social improvements with the education system and safety and things like that. All of those things attracted us to Camden because as urban designers we saw it as [rural] renaissance of a local city.”
IGNARRI LUMMIS
Paul Hoyle, director of development
“Our firm [started] in Camden in 1921. We have worked with Heart of Camden for over 25 years on housing rehabilitation and other project types.”