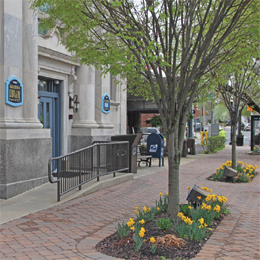 A Community on the Rise

Since taking office as mayor or Swedesboro in the early 2000s, Tom Fromm has seen the borough’s downtown district emerge as a bustling destination spot filled with renowned restaurants, specialty shops and frequent visitors from the area itself and the rest of South Jersey.

As proud as he is of that transformation, however, Fromm believes Swedesboro— a town founded way back in 1638—is just getting started.

“We’ve always strived to be something like Haddonfield or other towns with a vibrant downtown,” Fromm says. “That’s been our goal since we started and we’re seeing a fair amount of success. It hasn’t always been as fast as we would like, but we keep plugging along.

“We’re definitely seeing people take advantage of the buzz going on in Swedesboro and investing in our town. All kinds of new things are happening and it’s exciting.”

Along with Swedesboro, the surrounding communities of Woolwich and Logan have experienced tremendous growth in recent years, from desirable housing developments to an evolving business scene. That’s quite a difference from what the area looked like in the 1970s, when a couple of visionaries helped change this corner of Gloucester County forever.

The impact of Pureland
When Charles Walters and Carl Helwig considered developing an industrial park more than 40 years ago, Logan Township—consisting mostly of farmland at the time— stood out as the perfect location for a number of reasons. But even they had no idea the kind of effect the Pureland Industrial Complex would eventually have.

“We were the only ones down here and it’s nice to see that we ended up spawning this [growth],” says Walters, Pureland’s vice president. “We were in the right place at the right time. A lot of people have realized the potential here.”

Today, Pureland is a 3,000-acre industrial park consisting of facilities for manufacturing, warehousing, distribution, research, office space and more. The largest industrial park east of the Mississippi—and second-largest in the country—it is home to more than 175 companies and 8,500 employees.

“When we first came down here, there was very high unemployment and there weren’t a lot of jobs in the area,” Walters says. “Folks who lived here out-migrated to Cherry Hill or Deptford or places in Pennsylvania.” Once Pureland started bringing in major companies and thousands of jobs, though, there was a reason for residents to stay—and for new- comers to arrive.

Politicians at the local and state level realized Pureland’s influence and have always been supportive, according to Walters.

“Over the years the municipal authorities in the county and even the state have recognized the economic advantage of having a place like Pureland,” he says. “It became an economic engine not just for the county, but for the state with all the taxes and jobs that are created here. They’ve been very cooperative.”

National companies were the first to buy into everything that Pureland has to offer, particularly its access to major roads like I-295, I-95 and both the New Jersey and Pennsylvania turnpikes. The complex still has a national presence as well as a local one.

“If you look at the tenant roster, it’s a who’s who of national and international companies,” Walters says. “We have Mitsubishi and U.S. Foods and companies like that, as well as Rastelli’s, which is a local company that has grown into a national force. The names are well-known and they’re good tenants.

“From Pureland, within a day’s truck drive you can reach a third of the population of the United States, which is a heck of a lot of purchasing power. So that’s a great impact.”

Since Pureland’s founding, Walters has seen Logan and Woolwich continue to grow and welcome in new residents. “The housing market down here has flourished,” he says. “During the recession, like anywhere else, it lagged off a bit, but now it’s coming back and we’re seeing a lot of residential construction east of us in the neighboring townships.”

The best of both worlds
Logan, with its strong Pureland influence, leads into two other desirable communities that often go hand in hand: Swedesboro and Woolwich. Residents of either town appreciate having easy access to the old-school charm of Swedesboro and the more modern setting of Woolwich.

“The Swedesboro-Woolwich area is a great location and I am fortunate to call this community my home,” Assemblyman Adam Taliaferro says. “The area is one of the fastest growing in our state and has seen increased business development in recent years. A lot of this success is due to the unique partner- ship between Woolwich Township and the Borough of Swedesboro. Local officials at the municipal level have been unified in bringing opportunities to the area that benefit both Swedesboro and Woolwich.”

Swedesboro has especially embraced its downtown area, and the last decade has seen new lighting installed, the streets cleaned up and the decrepit sidewalks replaced by brick pavers. It has become an attractive location, and according to Ceri Galati of the Economic Development Council, seven new businesses opened just last year.

“I think that being in Swedesboro business-wise reminds people of the old home- towns, where the mom-and-pop shops were,” Galati says. “We have everything you need right here. You can come and walk the street and enjoy all of it. It’s accessible and intimate, and people are seeing that this cute little town really is starting to thrive.”

Great cuisine is a huge part of the scene, including well-regarded restaurants like Botto’s Italian Line Restaurant—which opened an out- door dining patio last year—and Tavro 13.

“Believe it or not, within this two-block area there are 14 restaurants, and that’s just the downtown area of Swedesboro,” Galati says. “Not all of them are going to be a Botto’s or a Tavro—some of them are little pizza shops— but man do they serve some good food.”

Galati points to the work of the Economic Development Council and the Greater Swedesboro Business Association for high- lighting and promoting the area businesses. Signature events throughout the year—such as the Dancing in the Streets series during the summer, the upcoming Olde Kings Jazz Fest and A Taste of Swedesboro in May—also bring many visitors into town.

“Almost everything we do, especially from an economic development perspective, is geared toward getting people to come to Swedesboro for something,” Fromm says. “Our goal is to show off Swedesboro and let people see what we have to offer, and hope they come back and support our businesses. And it’s working.”

“Swedesboro’s downtown area has certainly been embraced by both residents and visitors to the area,” Taliaferro adds. “Our residents are clearly dedicated to perfecting a charming downtown atmosphere that is family friendly. Many memorable events throughout the year draw visitors from all over the region, such as Swedesboro-Woolwich Day, the Jazz Fest and Christmas Parade, which show a deep appreciation and love for the town.”

What’s on the horizon
Walters says there is still about 300 acres left to develop at Pure- land and the key is continuing to adjust to companies’ modern needs and the call for same-day or next-day distribution. He is confident in the future of the complex.

“Right now, the market is strong,” he says. “Vacancy rates are going down, rental rates are going up and the amount of concessions that had to be given during the recession is dwindling.”

Diane Hale, a councilwoman in Swedesboro, is hopeful that current businesses continue to thrive downtown and that new ones will keep flocking to the area. “There’s a brewery that is very interested in two different spaces and would like to be in by the end of the year,” she says. “That would be a nice addition to what we already have.”

Fromm is also excited about the future of Swedesboro’s downtown, namely what he calls their “most ambitious project ever.” The borough purchased a one-acre parcel of land that fronts Kings Highway in the heart of town and extends to 2nd Street. The redeveloped area could eventually contain retail and restaurants on the bottom floor and possibly high- end apartments or office space on the top, as well as green-space fronting Kings Highway and public parking on 2nd Street.

“We made the decision a couple of years ago that it was important for us to have control of this last big piece of undeveloped property in our downtown,” Fromm says. “So we made the financial commitment and bought that property. ... It’s a huge property and we’ve had discussions with some developers. It’s something that we believe will define the downtown for at least the next few decades once we find the right developer.”

WHAT BUSINESSES ARE SAYING

BOTTO’S ITALIAN LINE RESTAURANT AND BANQUET ROOM
Robert Botto Jr., Owner
“I am part of a business that has been family owned and operated for over 50 years. I enjoy meeting my patrons and I look forward to making them happy when they patronize my business. We are very happy with the growth of the area and that is the reason why we keep investing back in our business, to give our patrons what they are looking for. For example, we added on a 1,000-square-foot outdoor seating area last year that was very [well received] by my patrons, and at this time we are renovating our 3,000-square-foot banquet room.”

TEAMDENTAL SWEDESBORO
Dr. Murtuza Jaffari, Owner
“The Swedesboro/Woolwich community has been so welcoming to TeamDental over the years. I love how supportive everyone is of their local businesses here. The growth we’re seeing in this area is very promising and solidifies our decision to open our practice here. We are very excited to be a part of that growth.”

ALLIED ENGINEERING AND DESIGN
Curt Schellinger, PE, Vice President
“I do see the potential growth in this area and we are excited about being part of it. The employees like the rural environment. There are no parking issues, wage tax or traffic that come with working in the city and we have all the amenities we need.”

ALLIED DOCUMENT SOLUTIONS AND SERVICES
Rob Richardson, President/Founder
“Personally, the commute for me is less than 10 minutes, [and the area also provides] access to personnel—over a third of our employees live in Swedesboro/Woolwich. We are very excited about the growth in the township; personally for conveniences and professionally for business-to-business opportunities.”

VILLAGE EYECARE
Dr. Sally Halim, Owner/Optometrist
“I love the small-town feel of the Swedesboro/Woolwich area. It’s really nice seeing my patients around town and out of the office, as well as in the office. It makes for a real sense of community.”

WARMUTH INSTITUTE OF TECHNOLOGY
Ingrid P. Warmuth, M.D., Medical Director
“The community is so amazing. Our patients are friendly, engaging and we enjoy interacting with them. We have built a trusting relationship and are proud to be treating the area for all of their dermatological needs.”

LIT CIGAR LOUNGE
Anthony DiDonato, General Manager
“This is a great community with a diverse population. The downtown area is really growing with some great stores and restaurants, and we enjoy being a part of it. We’ve also found the borough officials to be supportive of what we are doing.”