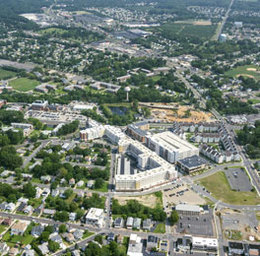 Glassboro is undergoing one of the stateâs largest municipal redevelopments and the transformation could change the way people look at South Jersey.

The excitement in the air around Glassboro is palpable these days, and for good reason. A transformation of the borough has been in the works in recent years, and if you havenât driven through lately, you probably wouldnât recognize the place.

While the revolution has been taking place across the borough, a major part of it has been focused on the expansion of Rowan University and the boroughâs downtown.

In other words, thereâs never been a better time to see all that Glassboro has to offer.

How it all started
Glassboro Administrator Joseph Brigandi Jr. was born and raised in Glassboro. He remembers Gloucester County before the influx of strip malls and housing complexesâand he also remembers when those developments started to take over.

âGrowing up, Rowan was Glassboro State and it was more of a teacherâs college,â he recalls. âWe had no Deptford Mall or strip malls, so the downtown was the only business district we had. Because it was a much smaller town then, there were maybe three to four eateries. The downtown was thriving then, like a lot of old-time downtowns were, and the college was smaller; it was something we were all proud of.

âThen, as urban sprawl does, up came the mall and the farmland turned to houses,â Brigandi continues. âGlassboro State was growingâit became Rowan and their dynamic was changingâand our downtown went down.

âI was actually a school business administrator prior to coming to this position, and when I was asked to take this job [about 16 years ago], at the time it was a passion of mineâknowing how it was and what it had becomeâto restore it to what it was, if not better.â

Fortunately, Brigandi was not the only one looking for a renewed vision of Glassboro, and the talk began about what could be done to change what Glassboro had become.

Larry and Theresa DiVietro, president and CEO and director of business development and marketing, respectively, of Land Dimensions engineering firm, were two people who saw what a reenvisioned Glassboro could be.

âWhen we moved into the community in 2003, when we bought the bank building we were going to rehab, there was a bullet hole in one of the top windows,â Theresa says. âI really had to seriously think, âWhat was I doing for my employees?â and âWas I bringing them to a safe environment?â And this was just 12 years ago, which really wasnât that long ago.

âBut we thought it was a good investment, and believed in redevelopment and the talk of Rowan Boulevard, which at the time was only talk,â she continues. âBut we were hopeful the talk would eventually turn into reality, and it did. We find ourselves very fortunate to be a part of that process from the very beginning.â

Land Dimensions was introduced to the first developer that came into the community for the Rowan Boulevard project, DiVietro says, and as a result, they have continued through the years to do the private site work design for the developers of the project.

Rowan Boulevard
Ask anyone involved in the borough or Rowan University, and a tale of two entities working separately will ultimately come up. It is no secret the two had a lukewarm relationship for years, but that has changed, thanks to a driven borough council and Rowan President Dr. Ali A. Houshmand.

âWhen I came here in 2006 from Drexel University, no one knew where Rowan was,â Houshmand said at the ribbon cutting for 220 Rowan Boulevard this month. âBut I had hoped this place could change from a pass-through town to a destination. I dreamt big about this place.â

Dr. Houshmand wasnât the only one, but becoming better business partners was only one of the problems the borough and Rowan had to overcome in order to revive the downtown.

âThere were really two obstacles we had to deal with,â Brigandi says. âGeographically, the college was four blocks from downtown, and unlike in the younger days, there werenât a lot of businesses that were attractive to make students and staff come down.â

As a result, a new road was planned that would link the two, and a game plan was created for the existing downtown.

âWe got grants and we did planning studies. I brought on board developers and we did other things, like acquire a lot of land ourselves,â Brigandi adds. âWe said, rather than have the developers buy the 90 properties on Rowan Boulevard, weâll acquire the land and do a ground lease with them for each project that comes on board. â¦ Itâs been a work in progress over the years but every couple of years weâre finishing another phase and starting work on another two or three more.â

The first phase of the project, an 884-bed student housing complex, opened in 2010, along with a two-story Barnes & Noble Collegiate Bookstore.

The Whitney Center, a five-story, mixed use building filled with student housing and retail businessesâincluding Sun National Bank, Pizza Hut and YoGo Yogurtâopened in 2012, and the Enterprise Center, another five-story building that houses classroom space, collegiate offices and retail businesses, opened in 2013. HMF Financial Advisors, The Boulevard Salon, Treasures on Broadway and LUSH Nail Salon are just a few of the businesses at the Enterprise Center.

A six-story, 1,200 space parking garage and the Courtyard by Marriott at Rowan University also opened in 2013.

The ribbon cutting at the 220 Rowan Boulevard building is the most recent opening of the project.

The mixed-use building, developed by Nexus Properties of Lawrencevilleâwho also built the Enterprise Center and the parking garage on Rowan Boulevardâcombines retail, medical and housing space. The 316,000 square foot complex was approved for $22 million in tax incentives over two years through the Economic Development Authorityâs Grow New Jersey Program.

Nexus Chief Operating Officer/Chief Financial Officer Dante Germano, a native of Glassboro, says he could not be more pleased to be involved in all that is taking place in the borough.

âThey have a tremendous town there,â he says. âJoe Brigandi and that councilâthey are all so pro-business right now. Theyâre devoted and they were the originators of planning this [redevelopment]. As a developer, you donât often get to walk in and see that everyone is rowing the boat in the same direction, but everyone is focused on the same goals there.â

One of the retail tenants already on board at the 220 building is Inspira Health Network. John DiAngelo, CEO of Inspira, which will be entering into a unique partnership at the 220 building with Cooper University Health Careâs Bone and Joint Orthopedic Services, says Inspira appreciates the opportunities that have been made available in Glassboro.

âAs we cement the location at Rowan Boulevard, we see the possibilities as to what Rowan is doing and weâre excited about it and how we can participate with that group,â he says, noting there will also be a family practice, urgent care center, radiology center and behavioral health outpatient center at the 220 building. âWeâve looked at other things we may be able to do with them, but we think [the services available at the 220 building] is a good start to go forward.â

Whatâs next
Glassboro officials are currently considering proposals for two additional land parcels on Rowan Boulevard, with construction slated for completion in 2017 and 2018. Construction of the new town square is also slated to begin this fall, and redevelopment of the old downtown Roxy Theater is expected to begin within the year.

The important thing to noteâand something Vail says the borough has been diligent about keeping up onâis that businesses looking to move into any of these areas, or other parts of Glassboro, may be entitled to tax incentives through the Economic Opportunity Act, much like the new 220 building was.

Anthony N. DiFabio, Psy.D., president and CEO of childrenâs services organization Robinâs Nest and former chair of the Gloucester County Chamber of Commerce, says he is looking forward to the projects that are coming down the line in Glassboro and that people would be hard-pressed to find a more prosperous community.

âPeople are amazed and astounded by what theyâre seeing now, but this all is just ushering in what is to come and Glassboro is going to continue to grow and expand,â he says. âIt is truly going to transform South Jersey.â

âWeâre shooting for the stars, and itâs going to take some time, but weâre moving right along,â he says.

But Houshmand may have said it best: âYou ainât seen nothing yet.â

Stay tuned for the continued story in an upcoming issue of South Jersey Biz.

What Businesses Are Saying

Brown & Brown Insurance Company
As a large, publicly-traded insurance broker, Brown & Brown is one of the only big businesses on Glassboroâs Main Street. A figure in the town since 2005, Brown & Brown Executive Vice President Kristen L. Handel says the firm has opted to stay in Glassboro because of the local economyâand the people.

âThe support we get from the township and the public is just phenomenal,â she says. âEveryone is dedicated to keeping that Main Street a âMain Street,â which is so important. Generally, weâre getting away from that [across the country], and I love that Glassboro is trying to maintain it.

âWe are a publicly traded company and we chose to stay on this Main Street, which I think speaks volumes to the community,â Handel continues. âWe want to stay here and we want to hire you and your kids. We bring national buying power to the homeowners and the community and we think Glassboro is just great.â

HFM Financial Advisors Inc.
With education as the backbone of their business, it only made sense for HFM to move to Rowan Boulevard, where they could partner with Global Learning & Partnerships of Rowan University in the Enterprise Center, conveniently located above the new HFM offices.

âI had a vision: it would be nice if we could bring clients together in a workshop setting where we could teach them, but they could be comfortable in an environment where theyâre learning, not feel like theyâre being sold anything,â says HFM President Michael P. Pallozzi, AEP, CLU, ChFC, President.

âOn Rowan Boulevard, we would be able to partner with Global Learning upstairs in the Enterprise Center and use their classrooms. Thatâs one of the main reasons we moved here, and it has worked out well. Our clients have loved the transformation we made with our firm because they love the atmosphere and everything thatâs been going on here on the Boulevard, with the 220 building and all the retail outlets across the street. â¦ Itâs been an overall great experience.â

Treasures on Broadway
This fashion-forward boutique was originally founded in Pitman in 2009, but moved to 227 Rowan Boulevard last October. Owner Teresa LaMonica says business has âexplodedâ since the move and she could not be happier with her decision to relocate.

âI really liked the vision of what was happening in Glassboro, and the support of the council and the mayor,â she says. âThe infrastructure is very pro-business and certainly with the development of Rowan Boulevard I just thought it was a fabulous location. â¦ The developer, Nexus, is also very involved, and wants to make sure the businesses succeed. Itâs just an overwhelmingly beautiful area now.â

Computer TechLine
Providing IT support for small businesses, Computer TechLine President Herman McCargo says opening in Glassboro five years ago made a lot of sense from a necessity standpoint, and the company has thrived here.

âWe get a lot of people that come in that are glad weâre here,â he says. âThereâs nothing else [like Computer TechLine] that is really servicing the area. Instead of having to drive to Deptford, they can come here and see us.â