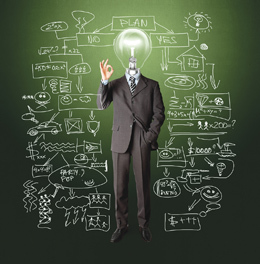 
by Danielle Burrows
Launching a new business takes more than a bright idea. Read our refresher course to brush up on the essential tenets of entrepreneurship before tackling your next venture.

By day, Ed OâBoyle was a corporate consultant. But in his off-hours, he was, for many years, a closet entrepreneur. âIâd constantly write up ideas and business plans, organize them in binders, and then place them on the shelf, where theyâd collect dust,â he says.

Odds are, he wasnât alone. More than 40,000 businesses opened in New Jersey in 2008, according to U.S. Small Business Administration statistics. And for every inspired idea that evolves into a business, there are countless ideas that donât. OâBoyle mightâve joined the ranks of the perpetual dreamers had a phone call not fortuitously merged a longtime hobby with a legitimate marketplace need.

âA friend whoâd recently lost his mother called me, back in 2005,â OâBoyle says. âHe was aware of my interest in photography, and asked me if I knew of options not only for digitally organizing family photographs, but for making them easily available to family members nationwide.â

OâBoyle didnât. A Google search turned up two companies offering photo digitization services on a national scale, but both outsourced their scanning overseas. âMy instinct told me that customers were probably hesitant to have their highly valued photos shipped internationally,â OâBoyle says. A version of these businesses that kept clientsâ precious family memories on American soil, he theorized, could clean up with Baby Boomers reluctantly entering the digital age.

Eventually, OâBoyleâs company, Fotobridge, was bornâbut not without some bumps along the way. To compete with the other companiesâ labor cost advantages, OâBoyle had to find machinery that could reduce the role of human labor. Trial, error and endurance prevailed. Today Fotobridge boasts 13 employees and a 4,000-square-foot facility in West Berlin.

OâBoyleâs is the classic entrepreneurial story: Restless wage-slave comes up with idea, scopes out the marketplace, recognizes a customer base and goes into business. Conduct a web search for âadvice for starting a business,â and youâll be served a slew of common sense tidbits that follow the same arc: Do what you love. Write up a business plan. Identify potential clients. Prepare to work long days.

But beyond these pat nuggets, what are the nuances that lead to success for entrepreneurs like OâBoyle, and failure for so many others? In a state like New Jerseyâranked 50th on the Small Business and Entrepreneurship Councilâs 2010 Small Business Survival Index, based on taxes, health care policies, energy costs, government spending and regulationsâwhat does it take to succeed? A few successful South Jersey entrepreneurs share their earned insights.

Tip No. 1: Learn the basics of business administration
Victor Masi knew a lot about dental appliances; heâd graduated New York City Technical College with an associateâs degree in dental technology. It was the business administration side of things that eluded him. âUnfortunately, dental technology programs donât teach you about marketing, about balancing books, or about management,â Masi says.

And so, with self-employment as the goal, Masi went back to schoolâto Rutgers University, where he earned his bachelorâs degree in business administration. He graduated and, since 1986, has owned and managed Masi Dental Laboratory, Inc. The Cherry Hill company now creates crowns, bridges and implants for dentists across the East Coast.

Not all entrepreneurs are willing or able to invest time and finances into a university-level business education, but the lesson remains: Businesses donât run on know-how and passion alone.

âI come across a lot of entrepreneurs who are passionate, but who donât have the whole picture,â says Sarah Piddington, interim director of the South Jersey Technology Park at Rowan University. She encourages people to attend free workshops sponsored by the Entrepreneurs Forum of Southern New Jersey. âThe Entrepreneurs Forum provides monthly educational opportunities for small and start-up business owners in South Jersey,â she says. âTopics have ranged from contracting with the government to low-cost ways of marketing a business.â

Tip No. 2: Tap into the vastness of the web.
Historically, starting a business meant immediate out- of-pocket expenses for everything from logos to branding. Today, through outsourcing and the more recent phenomenon of âcrowdsourcing,â such services are increasingly accessible on a start-up budget.

The advent of websites like 99Designs.com and Elance.com has democratized the proposal process, particularly on the design front, thereby increasing a business ownerâs access to work performed on specâthat is, before a contract is even awardedâa shift that Ed OâBoyle credits with increasing Fotobridgeâs capital efficiencies.

âI posted a project on the 99 Designs, explaining that I was willing to pay $300 for a logo. Anyone in the community was able to suggest a solution,â he says. âThe options poured in, and I had my pick from close to 50 logos by a variety of artists, rather than five or six designed by the same person.â

If the vastness of the web induces skepticism or just plain overwhelms, rely on sites recommended by other business owners. OâBoyle is a fan of UltraLightStartups.com and Mixergy.com for continued business learning. âAll of these online resources take advantage of new infrastructures that reduce the cost of service, give you increased access to service providers, and provide better filters. I classify this under capital efficiency. Iâm able to learn a lot and get very specific about what Iâm learning,â he adds.

Tip no. 3: Hire smart
Online connections have transformed the way entrepreneurs tackle the hiring process as wellâoffering access to unprecedented numbers of candidates. This makes good help both easier and more difficult to come by. The trick, say entrepreneurs, is using these new tools to your advantage.

Even Craigslist, better known for serving up used furniture than pristine talent, proved a fertile hiring ground for Fotobridge. The key, OâBoyle says, is to exercise thought at the top of the posting process to deter under-qualified or less-than-motivated jobseekers from applying. âGo ugly early,â he says. âIn your description, describe the most challenging and difficult aspects of the job. Set big expectations, in regard to the level of energy and commitment needed to work for a start-up. Be very specific with duties, compensation, expectations and performance measuresâ thisâll deter clock punchers.â

Secondly, he advises making it difficult to âget into the funnel.â In other words, request three references, a cover letter and rÃ©sumÃ©, and work samples applicable to the position at hand. âGive specific instructions on how to apply, and only respond to those that follow those instructions,â he suggests.

Tip No. 4: Build your (local) social network
LinkedIn, the social media site for professional networking, proved valuable to Michael Pallozzi, senior wealth adviser and part-owner of HFM Investment Advisors, when he coupled it with face-to-face interaction. Excited by the siteâs potential but tired of soft introductions, Pallozzi organized an event called âLinkedIn at the Links,â held at Scotland Run Golf Club in Williamstown. Attendees perused one anotherâs LinkedIn contacts and requested referrals from other attendeesâ networks.

Les Vail, executive director of the Gloucester County Chamber of Commerce, was so taken with the idea that he asked Pallozzi if he could call it âLinked @ the Chamberâ and make it available to Chamber members. Starting in January, a group of 20 participants, all representing different industries, began meeting biweekly. Pallozzi is excited about some promising leads that have come from the meetings.

To naysayers who might think their local chamber has nothing to offer, Vail suggests they look again.

âOur chamberâs Microsoft Office training is well-attended, and our networking events are attended by many decision-makers,â Vail says. âWeâre heavily focused on networking here, and Iâve never met a business owner who complained of having too many contacts.â

Tip No. 5: Diversify your income
Masiâs business school education introduced him to several tried-and-true philosophies for survival. One of those, imparted to him by a managerial accounting professor, has served as a rule of thumb ever since: Never allow one client to dictate more than 20 percent of gross revenue, as that could shake the companyâs stability. Abiding by this rule proved especially challenging in Masi Dental Labâs early years, when there were fewer accounts. Yet whenever one clientâs business neared that pivotal 20 percent mark, Masi remedied the imbalance by letting the lagging businesses know that their competition was surpassing them, sometimes even going as far as sharing with them the marketing tactics he noticed among his most successful client.

âThe smaller accounts, in turn, would strive to achieve their competitorsâ stature, and would therefore increase business,â he notes. âBy elevating them and their revenue, I maintained that ratio.â

Tip No. 6: Prepare to become a defacto salesperson
Julie LaVan, who long served as corporate counsel for several publicly held corporations before starting her own Moorestown-based law firm, is an attorneyânot necessarily a salesperson. Yet, âWhen you own a companyâand particularly, as is the case with LaVan Law, when you carry the name of your firmâyou bear the responsibility of seeking opportunities in which to turn relationships into business,â LaVan says.

Well connected within the charitable community, LaVan wasnât sure how to turn cocktail conversation into a request for business, and found herself erring on the side of passivity. She eventually concluded that social events were the times at which to cultivate the relationships, and that more pointed business conversations should happen after the fact.

âRelish in the moment,â she suggests. âIf youâre at a charity event, focus on the task at hand. But afterwards, find a way to follow up and transition into businessâmaybe via an email or a handwritten card, or even just a phone call.â

She adds that being sincerely interested in othersâ causes and endeavors is one of the most effective, albeit simplest, sales tools available. âThings come full-circle,â she says. âInvest in others, and thereâs a great likelihood theyâll invest in you.â