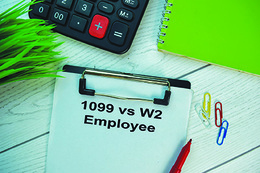 Risk Does Not Always Equal Reward
In the age of the âgig economy,â itâs more important than ever for businesses to know and abide by the correct categorizations of their workforce.

The global behemoth miscategorized hundreds of thousands of its New Jersey drivers as independent contractors rather than W2 employees. By doing this, the company steered clear of providing their employees with standard W2 benefits like medical leave and health insurance, and saved money by not contributing to unemployment, temporary disability and workforce development.

That is, according to the New Jersey Department of Labor & Workforce Development (NJDOL), until an audit discovered the misclassification, forcing Uber to pay the state $100 million in back taxes.

Uber’s check is the largest payment of this kind that New Jersey has ever received, and it certainly won’t be the last: Companies inaccurately classify their employees every year, getting them in serious trouble at both the state and federal levels.

South Jersey Biz talked to experts to find out how other businesses can avoid such a colossal mistake in the future. Those conversations revealed that the most important part of the process is identifying the differentiating factors between an independent contractor and a W2 employee, which is where a three-step assessment comes into play.

Per NJDOL and similar resources, the ABC Test states that unless three specific qualifications are met, then an individual should be considered a W2 employee:

– Alone: The individual has been and will continue to be free from control or direction over the performance of work performed, both under contract of service and in fact; and

– Control: The individual is customarily engaged in an independently established trade, occupation, profession or business.

In other words, if an employee is controlled by one business, like a salesman who works a set schedule in an office each week, they qualify as a W2 employee. However, if an individual is free to work more fluidly throughout their trade without being tied down to a specific company, they are likely considered an independent contractor.

Patrick Phillips fully embraces his W2 team as the owner of Phillips Janitorial Services. He says that the sole reason he hires them is to control the quality of work he provides to clients.

“I feel that having in-house employees gives me a greater degree of control over the quality we produce,” Phillips says. “I pride myself on the fact that we are able to retain the vast majority of our customers because of the consistency of our quality. As a matter of fact, we still have many of the customers we started with 17 years ago, and I’m immensely proud of that fact.”

Angela Morrison, the owner of virtual-assistant business Angie’s At Your Service, explains that when hiring a W2 employee, companies “only get to write off a percentage of their wages.” Meanwhile, a 1099 employee is “100% tax deductible.”

Morrison says that this is why businesses will oftentimes try to bypass the costs of having W2 workers by misclassifying them as independent contractors.

“Businesses that know that will try to pass individuals off as a 1099 because it's cheaper, you get to write it all off. There are so many other different insurances and things like that that you don't have to worry about. But the danger in that is that somebody's not properly paying for something like taxes. If someone has a W2 employee, and they're classifying them as a 1099, they're not paying the proper taxes and things like that on that individual, and there's a hefty fine that comes along with that,” she explains.

Morrison herself has a team of W2 employees working within her company, which serves as an independent contractor for its clients. “Businesses want to make sure that they stay away from trying to classify someone as a 1099 when they're actually an employee because they’ll get you, and all the money you thought that you were saving, you won't be saving anymore.”

Fortunately, there are foolproof ways to ensure the proper classification of a company’s workers. While utilizing the ABC Test is a good place to start, employers can also hire professional staffing companies for guidance.

According to Cristina Pinzon, the president of stateside affairs for the New Jersey Staffing Alliance, “Partnering with a professional staffing company affords client companies valuable resources in the areas of risk management, legal, human resources and insurance protections. We consistently counsel our customers on safety issues that arise on our tours of their facilities and advise them on policies of theirs that may not comply with local and federal legislation.”

Pinzon adds that while the “gig workforce” phrase has only been coined recently, staffing companies have relied on a versatile workforce for decades.

“Workers have sought us out in order to secure work for the amounts of hours needed to meet necessary bills, accommodate school schedules or supplement other income. These individuals might not otherwise be employed but are contributors to the economy. We can fulfill client needs by supplying sometimes two or three part-time workers to fulfill one traditional 40-hour work week,” Pinzon says.

Similar to the New Jersey Staffing Alliance, there are multiple other companies around the state that businesses can utilize.

For example, Workplace HCM is a payroll and human resource company that serves clients from its Marlton office. President Frank Plum emphasizes the importance of hiring professional help to avoid misclassifying employees and suffering serious monetary and legal consequences.

“There are two different types of penalties that are coming—federal penalties as well as state penalties.” Plum adds that companies that make this immense mistake “owe all the back taxes plus penalties on top and interest on top of that. … That's why misclassifying employees is so dangerous, and why people hire payroll companies like us and HR companies like us.”

Of the $100 million that Uber and its subsidiary Rasier LLC owed New Jersey, $78 million accounts for past-due contributions and $22 million pays for penalties and interest. It’s a hefty price to pay, but it’s a cautionary tale that businesses of all kinds would do well to heed: Dotting your T’s and crossing your I’s now will pay dividends in the end.