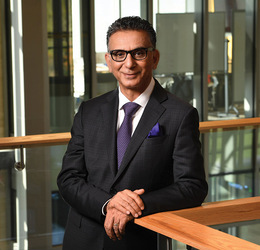 In 2012 Dr. Ali A. Houshmand became Rowan University’s seventh president and during that time he’s overseen tremendous transformation on campus as the school’s resources continue to grow. What’s more, during his tenure enrollment has more than doubled, which has helped Rowan earn the distinction of the fourth fastest-growing research university in the country for three years in a row.

We caught up with Dr. Houshmand during a rare break in his schedule to find out how he likes to unwind from the stress of the job, his penchant for making hot sauce and his upbringing in Iran.

You once worked at KFC while trying to support yourself through school. Was that the worst job you ever had?

No, but it was a practical way of demonstrating processes. I enjoyed the challenge of developing processes of making chicken faster than the other workers and it helped me persevere and desire to be better.

Having participated in 19 marathons, when did you first become passionate about running and do you think you’ll add No. 20 anytime soon?

I began running marathons later in life, so 19 was enough. Running was a natural progression from my days playing soccer. I was always competitive and played soccer very well in England, up to the semi-pro level.

What inspired you to take the idea of making your own hot sauce for family and friends and turn it into Houshmand’s Hazardous Hot Sauce to benefit Rowan’s emergency scholarship fund?

I was introduced to hotter sauces and recipes by my former Indian students many years ago. I enjoy gardening and creating things. Besides, I had to do something with all the peppers I grow. You would be amazed by how many hot peppers one plant can produce.

Besides running and making hot sauce, how else do you like to unwind from the job and relax? I raise koi in a small pond at my home. Koi are very relaxing to watch and they have their own personalities. They’re like pets.

What was the last book you read and thoroughly enjoyed? The Truth About Crypto, an incredibly insightful book written by Rowan alumnus Ric Edelman.

Had you not entered the world of education, what kind of work would you see yourself doing?

I really love to cook. Perhaps I would have pursued being a chef.

To have accomplished all that you have in your life to this point, how do you look back on growing up as one of 10 children living in extreme poverty in Iran?

It was an interesting life and it was a challenging life. But it was nice, too, because my parents and siblings were very close—we all shared the same kinds of challenges and struggles. You go to these big homes where there’s so much wealth, and there are people who sit in one corner of the house and the other in another corner and they never talk. In Tehran, we had no choice. The entire family room, kitchen and bedroom together was 150 square feet. So you had no choice, but to talk or to confront. So that’s how I grew up and it made me who I am today. I look at those tough times fondly.

What’s the best piece of advice you’ve ever received and how were you able to apply it to your life?

Never be ashamed to say “I don’t know.” I have always found it invigorating to surround yourself with people who “do know” and bring them together to accomplish great things.