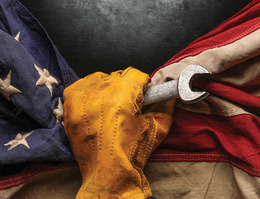 The State of Labor Unions
With nationwide approval of unions at a 50-year high, there is an increasing understanding of the skilled craftsmanship and community benefits at the heart of whatâs driving the resurgence of trade unions across a wide swath of industries.

Last September, a Gallup poll reflecting data gathered the month before made quite a bit of a splash during its news cycle; six months later, it’s still inspiring think-pieces musing over its findings. According to the poll’s respondents, 68% of Americans reported their approval of labor unions. And while that number only indicates a 3% increase from 2020, it was enough to put labor-union approval at the highest it’s been since 1965.

Starbucks baristas and Amazon employees nationwide are fighting to organize their locations. The John Deere and Kellogg’s workers’ unions stood firm until their members’ quality-of-life demands were met. Locally, the employees of New Jersey’s fledgling marijuana industry are already clamoring for unionization. As more workers realize the collective power they wield to fight unsafe, understaffed and unfavorable conditions, an increasingly positive view of unions and renewed understanding of how they can improve a toxic workplace has nudged them toward seeking union representation.

“There are a lot of positive reasons for joining a union but some of the main reasons are: collective bargaining for wages, benefits and standards; having good health coverage for you and your family; an annuity; and a pension so you can work towards a comfortable retirement,” notes Bryan Bush, the assistant business manager/financial secretary of Sheet Metal Workers Union Local 19. “Another benefit of belonging to a union is having a voice, in the union and the workplace. Ideas come from the union floor at union meetings, and can be brought to the negotiating table between the union representative and the employer to be collectively bargained—that is what it means to have a voice.”

But unions are largely relegated to or associated with hands-on labor jobs, which have sharply fallen out of favor over the years, thanks to the perception that a four-year degree is a stronger guarantee of financial stability and a career.

“When we were in high school, we were told that if you don’t go to college, you’re a loser,” says Hugh Giordano, director of organizing for UFCW Local 360, which represents cannabis, health care, grocery, and municipal workers. “The message was that if you do go to college, you’re going to be successful and make lots of money—that student loan, don’t worry about it. And now we know that’s not true.”

The South Jersey Mechanical Contractors Association (SJMCA) has a membership base comprising companies that employ the union plumbers and pipefitters from UA Local 322. Executive Director Cathy Murphy points out the long struggle to frame union trades as not a job people should settle for, but rather as a pipeline to counteracting the longtime shortage of well-trained craftspeople providing necessary skills and work to their communities that comes with scores of educational and professional development.

“Local 322 provides state-of-the-art educational opportunities for our members, starting with the apprentice program, on-the-job training, OSHA training, advanced journeyman trainings and master plumber relicensing classes,” she notes. “SJMCA, like Local 322, is committed to continuing education. We believe education is an investment in your future. We have awarded over $49,000 in combined scholarships at Mainland Regional High School and Rowan University students in the mechanical fields.”

Amy Hennessey, executive director of the Employing Bricklayers Association, says she noticed the sea change well before the pandemic thoroughly upended the employment landscape. Rather than vocational-technical careers being sneeringly dismissed as settling, Hennessey has seen more and more people eschew college in favor of careers that also offer on-the-job training without incurring debilitating debt.

“We’re getting back to the ‘90s, where people had vo-tech classes,” she notes, explaining that public schools’ introduction to vocational training through shop class, woodworking classes and other hands-on opportunities “all basically disappeared” from curricula.

“It’s nice that it’s coming full circle as the expense of college is making some people realize that it’s not all it’s cracked up to be, depending on your studies, and that parents are supporting their kids who don’t want to go to college,” Hennessey continues. “I think what happened was that parents were suddenly like, ‘Why am I paying $25,000—or even $70,000—a year for my child’s degree so they can be paid $40,000 a year and carry $200,000 in debt?’ when they could start working in a union or in the trades, start earning money right away, and have zero debt?”

Both Hennessey and David Bruce, the business manager for Plumbers & Steamfitters Local 322, refer to skilled craftspeople’s professions as “the other four-year degree,” in recognition of the training, education and different kind of smarts necessary to thrive in trades that have been unfairly slapped with the misnomer of “unskilled labor” for far too long.

Cutting through long-cultivated misconceptions about unions still remains a hurdle, but an increased collective willingness to understand the individual and community benefits they provide is an asset in highlighting the opportunities, safety and security strong union representation can offer.

“In my opinion, frontline workers that were not a part of a union were taken advantage of with their hours, were not supplied with the proper PPE and constantly put into harmful situations by the employer: I’ve spoken to many individuals about these issues and told them they should unionize so they would have a voice, someone to stand behind them to help them fight for their rights,” says Bush. “Communities [benefit] because … people tend to go where the work is, they buy a house, raise a family in or near the communities where there is work, which in turn helps feed back into the community.”

“Employing union labor, both residential and industrial, provides the highest quality craftsperson to get the job done right,” adds Murphy.

Of course, there are still plenty of skilled workers who aren’t eager for union representation. They have found that establishing their own non-union, or open-shop, businesses offers them much of the same benefits as their unionized counterparts while maintaining the freedom to run their companies as they see fit and being competitive in their bidding on both public and private work.

As the president of Associated Builders & Contractors New Jersey, Samantha DeAlmeida notes that she works with the 78% percent of construction industry who left their previous unions to create their own businesses, were unable to join a union or never belonged to one in the first place. “They’ve been successful in creating their own businesses and have worked in the merit-shop or open-shop space. They’ve been able to create careers and provide business opportunities for longtime employees and continue to bolster the workforce. This is really just an alternative to the union path.”

“We’re not anti-union by any means,” DeAlmeida continues. “I think folks recognize that you’re getting great, quality work whether you’re working with a union or a merit shop. There are bad actors on both sides, but merit shops are just as safe—they just haven’t had the advocacy that unions have had.”

Both union and open-shop representatives agree that an increasingly favorable opinion of hands-on work is beneficial to everyone, particularly as that shortage of trade workers is a lingering issue for both sides.

“There has been a resurgence of interest, and that resurgence comes from an awareness and a need,” says Hennessey. “I would say maybe three or four years ago, that pride in construction work started coming back.”

“It’s really working together and bolstering the workforce that’s the main priority,” adds DeAlmeida. “Many of my members work very well with the unions—we have to work with each other on projects since the workforce is so depleted at this time. My open-shop contractors use union subs and I know union contractors who use open-shop subs.”

As the country’s youngest workers finds their place in the employment landscape, they’ve helped to rekindle an interest in the power of unions while speaking to potential allies through means not available to previous generations of workers.

“The younger generation seems to want representation in the workplace,” says Bush. “We definitely see an upsurge in unionizing, which we call organizing.”

“We have social media now where workers are talking to each other not only in their own division or in their own industry, but in the state, in the nation and in the world,” Giordano notes. “You have workers from India speaking to workers here in America about the same companies and how they’re treating people. Social media has opened up that conversation globally. Workers’ rights is a big issue, and it’s probably because the younger workforce is organizing.”

And that youthful vigor, many agree, is just one way a rising tide will ultimately raise all ships and help shine a light on a career path that has long been overlooked.

“I think that younger generation knows they’re worth more than just the crumbs—and that’s great,” Giordano continues. “I’m really happy about that because, at the end of the day, if one industry gets lifted, it helps another industry realize that they can do the same.”