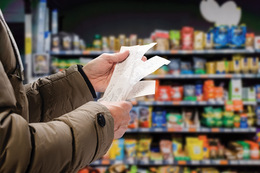 Inflationâs Impact
With the record-high numbers engulfing the economy, the business world wonders whatâs next.

There’s no shortage of troubling headlines these days with regard to the economy. Though jobs are coming back in droves and many businesses are finding ways to thrive as the COVID-19 pandemic has slowed recently, the truth is there are still plenty of concerns. At the top of that list is the alarmingly high inflation rate which has soared to its highest point in 40 years.

As a result, the cost of almost everything is way up, from gas and groceries to health care and housing. Part of the reason is the fact there has been a continuous high demand from consumers during a period of time when countless businesses are still struggling to staff properly while also being confronted with disruptions to the supply chain.

The increased cost of raw materials and supplier prices is having a major ripple effect across several industries and despite the relaxing of many COVID-19 protocols, there appears to be no clear resolution in sight. Adding fuel to the fire is the current Russian war in Ukraine, which Federal Reserve Chair Jerome Powell said will certainly exacerbate the problem.

As of early March, the Fed was considering increasing rates to try and stop the rising inflation in its tracks. But the question is, can they slow the economy just enough without causing unemployment numbers to jump back up?

Ralph Gallo, Parke Bank’s executive vice president and COO, says it’s a difficult task and that the Fed has a fine line to follow.

“Certainly, raising interest rates will have an impact on employment and slowing the economy,” Gallo says. “The challenge is to raise rates enough to have a noticeable impact on inflation without bringing the economy to a complete stop. The Fed must follow the ‘numbers’ and attempt to keep politics out of the analysis.”

One person who has been feeling the crunch of late is Patrick Gravenese Jr., the owner of Devil Dog Construction. With the high price of gas, he is spending exponentially more money to run his equipment and get his workers on the road. And when you factor in trying to navigate supply chain issues or bidding on contract jobs, he says the industry today compared to when he got into the business in 2017 is “night and day.”

“You win a bid on a job a week ago and you go from having a 10-15% margin on the bid to a week later and you are barely breaking even. And no [supplier] can guarantee anything. … People are networking so much to get their hands on materials and so you have people from the West Coast calling and looking for stuff on the East Coast. One minute a supplier has what you need and then you call back and they don’t have it anymore, and it’s a six-week wait,” he says.

On the corporate side of things, many employers are juggling the inflation spike with a competitive job market where trying to attract and retain top talent often comes down to who is offering the best compensation and benefits packages.

Chrissy Magnotta, director of client engagement at Katz Pierz, says the current job market has led employers to focus on the need for comprehensive benefits more than ever, but a shift in thinking is helping them find creative solutions to be able to do so. This may include programs centered around mental, physical and financial wellness, more robust PTO or flex hours, or the addition of group-sponsored ancillary benefits.

But employers, who have long had to contend with rising health care costs, are also now faced with deciding if they can offer increased incentives in 2022. With employees also spending more these days, increased wages may not make much of a dent in helping with their cost of living expenses. But is it realistic for the majority of companies to offer significant pay hikes in an effort to keep up with the current rate of inflation?

“I feel there are many options that an employer can explore to keep their benefit packages robust even if pay increases aren’t feasible,” Magnotta says. “Employers are exploring gas gift cards or allowances, healthy meal delivery or charitable donation match programs to incentivize employees outside of traditional compensation.”

Despite the rising inflation costs and other economic fallout surrounding the pandemic, the market remained particularly strong in 2021, providing hope and optimism that investors don’t see inflation as a lingering issue. With the economy growing at a rapid pace thanks to the waning impact of COVID-19, the Fed will be wary of attempting to curtail inflation at the risk of triggering a recession. In return, businesses will have to take a wait-and-see approach, as uncomfortable as that may be.

One way or another, change will come, but at what cost remains to be seen.