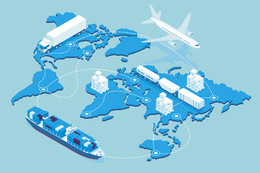 A Chain Reaction
Nearly 20 months since the pandemic began, its impact on the global supply chain is being realized on a local level as small businesses struggle to find products and people to relieve the pressure.

The news concerning supply chain disruption has been unavoidable in recent weeks. Between the scenes showing cargo ships lined up outside of ports and retailers urging consumers to holiday shop as soon as possible, it’s bringing an otherwise out-of-sight, out-of-mind process right into our daily lives. Yet, while regular consumers are just now feeling the effects, business owners have been in the thick of it for a while now. They’ve had to hope customers can bear with them as they face an unprecedented backlog of products, coupled with a labor shortage, and take creative measures to get by.

How we got here

Last March, when the container ship “Ever Given” became stuck in the Suez Canal, the world watched in disbelief at this waterway traffic jam. For six days, nearly 400 ships waited to pass through the canal, delaying what experts estimated to be $9.6 billion in goods.

“This was one of the first issues that brought to the surface how big a role cargo ships play in everyday life,” says Jeffrey Luft, director of programming at the Institute for Supply Management-New Jersey. A 30-year supply chain practitioner who has worked in multiple industries at the corporate and consulting level, Luft says the supply chain challenges we’re experiencing now are unprecedented.

However, for those within the industry, it’s been building over time. “For a number of years we’ve been discussing the impact of driver shortages, and now we’re seeing the impact,” he says. “At one point in time, truck driving was an appealing profession. You’d see a lot of mom-and-pop/husband-wife drivers, and it would be passed down in generations. In today’s world, truck drivers want to be home with their family at night, and the employment numbers in long-haul trucking have fallen off, which has caused an uptick in intermodal deliveries—moving the container partially on the road then to railways and then back onto a truck for its final destination. But there are only so many rail cars and drivers are still needed to make it all happen.”

Rich Super, owner of ABC Discount Appliance in Pennsauken, has struggled with employing truck drivers firsthand. “Labor shortages are something I’ve experienced here for the last couple of years with truck drivers. I could hire four people right now and put them to work immediately,” he says.

COVID hasn’t helped the matter, as safety protections have slowed things down or shut down completely for periods of time in countries where goods are originating. Luft says, on top of that, there is a container shortage in the Far East, leaving manufacturers with no equipment to load goods into.

Here in New Jersey, manufacturers are left without the raw materials or components they need to complete the final product assembly and move it along to consumers, he says.

Super says it has been a “series of unfortunate events” in his supply chain experience.

“A lot of manufacturers have the product 50 to 70% built, but they are waiting on chips or some other components. In one case, a manufacturer had thousands of fridges made but were waiting on the insulation to inject into them, but during the Texas ice storm, that insulation factory’s machines seized up and the insulation expanded in the outage. Coupled with recent hurricanes, it’s been a perfect storm for a slowdown. Once one sector recovers, something else happens,” Super says.

For the most part, Super says customers have largely understood the supply chain issues and have even made exceptions in their preferred product if an alternative is available. He also sees an advantage in being an independent business compared to big-box retailers.

“We can spin on a dime without waiting for something to go through a chain of command,” Super says. “We belong to a national buying group of about 500 members and we’re all ordering extra. If the buying group gets a special buy on a certain washer, we bring it in so we can show customers we have this in stock now. As things come in, we’re keeping them in our warehouse. I don’t cancel any orders even if the customer canceled it. Without that chain of command, we’re much more flexible.”

Buying in bulk has been the most beneficial measure taken by Heath Welsh, founder and CEO of Team Real Clean Services, a janitorial company serving the region. As someone who deals primarily with some of the pandemic’s most in-demand products—disinfectants and paper products—he recognized early on that he would need to coordinate with vendors and plan in advance.

“I was actually at a trade show the day after they announced New Jersey’s first COVID case. I got together every person I could find in the janitorial industry and discussed how we should plan if this becomes a pandemic. When it was officially declared a pandemic, we agreed we should all buy five-gallon drums of disinfectant and we traveled from Delaware to North Jersey to buy it,” Welsh says.

Welsh has been a part of several important health care operations throughout the pandemic, including the federal government’s field hospital at the Atlantic City Convention Center and mass vaccination sites at the Moorestown Mall and the Meadowlands Racetrack, among others, not only cleaning but keeping every dispenser stocked with toilet paper and paper towels.

While obtaining products was a challenge in the height of the panic, now that things have largely reopened, Welsh says staffing is a concern in his industry.

“People are afraid to go to work or they are making more on unemployment. If you’re a small, mom-and-pop business, you can’t keep up with the demand without employees. Corporations are back to work and they want clean offices. In-person meetings for doing business aren’t going away, and CEOs want to know what protocols are in place to keep their business secure,” he says, adding that vaccination status has also cost some people their job, although not in his company specifically.

The months to come

Experts in the supply chain industry estimate that the shortages and disruption we’re experiencing could last into the second or third quarter of 2022. Luft thinks it could be longer.

“Once you’re behind, you have to catch up, and we need to catch up for the current year and that is impacted by the upcoming holiday. We’re seeing shortages in toys and artificial Christmas trees. Everyone is advising to start shopping early. Don’t wait until Black Friday. Retailers that used to order with a 30- to 60-day lead time from the order date until delivery are now seeing those lead times up to six months and greater. That trickles down to everything else,” Luft says.

Small businesses are at the mercy of how well they’ve planned so far. “Most who have planned and worked with suppliers and shippers are positioned well. This did not come out of the blue and they should have been prepared to adjust,” he continues. “To get through the year, I think it’s all about communicating with suppliers. Make phone calls once a day to follow up on where the goods are.”

Everyone realizes this is a challenging time, and consumers have to temper expectations as well. “Be patient,” advises Luft. “I think this ‘new normal’ will continue to modify over time.”