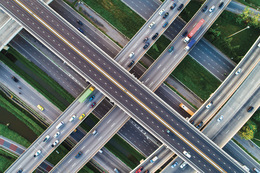 Something to Build On?
A look at what the proposed federal infrastructure bill could mean for New Jersey.

In early August, the U.S. Senate approved a $1.2 trillion infrastructure plan that would provide funding for projects across the country. Currently, the bill sits with the House of Representatives awaiting approval. If the bill ultimately receives House approval and is signed into law by President Joe Biden as currently constructed, it would include $12.3 billion for the state of New Jersey. That money would not only boost several existing projects—both large and small—but also pave the way for several others and generate millions of new jobs.

We spoke to Jack Kocsis, CEO, Associated Construction Contractors of New Jersey (ACCNJ) to get a better idea of how that money could help the state both in the short and long term.

Can you talk a little about how what the funding in this infrastructure bill would mean for both your organization and the state?

This money will fund projects around the state in robust amounts. We will see repairs to bridges and roads, expansions and assistance to mass transit, and we will finally see the Gateway Project come to fruition.

Many of New Jersey’s roads are in disrepair and more than half of bridges are considered structurally deficient. An investment in of this magnitude would be great for New Jersey’s economy, work force and commuters.

How big of a boost would this be for job creation?

This funding will create thousands of good-paying union construction jobs with good benefits. It is projected that the bill will create more than 2 million jobs per year over the next decade.

What are some of New Jersey’s more critical infrastructure needs?

The Gateway Project is one of New Jersey’s most critical infrastructure needs. It will modernize infrastructure that is more than 200 years old and is heavily relied upon every day. In addition, our state has a myriad of pressing needs including new schools, updated water infrastructure, upgrading our roads, toxic site cleanup and increased renewable energy. Many of New Jersey’s needs are critical and this funding will be extremely impactful.

Has the pandemic put a renewed focus on these needs at all?

The needs of the state of New Jersey existed pre-pandemic, have continued through the worst of the pandemic and still exist now. COVID-19 delayed high-level discussions at federal, state and local government levels as officials tackled the crisis, so attention to infrastructure needs was delayed for some time. That just makes the demands all the more visible now. With or without the pandemic, ACCNJ continues to highlight the infrastructure needs of New Jersey.

With interest rates remaining low, how advantageous of a time is it to capitalize on construction needs?

As you know, when interest rates are low, borrowing costs for construction are low. Respective treasury departments at multiple levels of government always have to factor in interest rates before they make a policy decision on what to borrow for and what projects to invest in. ACCNJ supports needed capital construction now.

While this bill is currently sitting with the House in D.C., what would extended delays mean for New Jersey’s roads, highways and other areas in need?

Delays in funding equate to capital planning delays and disruptions. A key point we touched on earlier was the job creation factor of federal infrastructure dollars. If the current bill advancing in Washington is slowed, the economic opportunities for labor and management will be delayed as well.