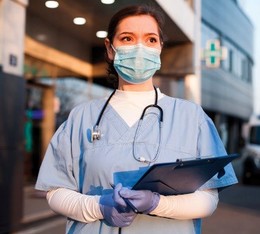 Filling A Critical Void
With the nation facing a shortage of health care workers, efforts are in place to retain New Jerseyâs present and future physicians.

As the pandemic drove most people into their homes and out of COVID-19 contagions’ path, health care workers were running headfirst into it, working extra hours, extra shifts and extra days. The tireless efforts of frontline workers across the world have been rightfully lauded as anything from heroic to downright superhuman.

But during a global health crisis, the medical professionals comprising our first line of defense are all too human, with breaking points arriving on the heels of long, brutal days and an unprecedented loss of life amidst the stranglehold of a little-understood, brand-new virus.

While there has been some hope rising to meet “the Fauci effect”—incoming college students inspired to become doctors by the highly visible chief medical advisor to the president, Dr. Anthony Fauci—the pandemic exacerbated a problem that first reared its ugly head about 10 years ago. There is a critical shortage of doctors and other health care providers, not just in New Jersey but across the country.

The American Association of Medical Colleges has projected that within a few years, the nation could see a diminishing number of doctors ranging between 80,000 and 150,000 positions. For the Garden State, which benefits from being a more desirable practice location than more isolated and rural parts of the country, that could translate to medical professions struggling to make up for a shortage nearing 5,000 positions, with more than half of that representing a void in primary care.

Dr. Thomas Cavalieri, dean of Rowan University School of Osteopathic Medicine, and other educators have seen the myriad factors influencing the doctor shortage stack up over the years. Externally, aging residents who both are living longer and rely more heavily on medical care, a growing general population and an increasing demand for services have been among the forces at work diminishing the pool of practicing physicians. Within the profession itself, earlier retirements as well as the number and regional distribution of doctors are also contributing factors.

“It’s something we’ve been discussing for the past decade,” Cavalieri says. “People are getting older and living longer, and there is also a shortage of certain specific disciplines. There is a significant shortage of primary care physicians, but there’s a shortage of some specific disciplines as well, like psychiatrists and the field that I’m in—geriatricians, who specialize in caring for the elderly—and in areas like pediatric subspecialties.”

The actual practice of medicine has grown more challenging, too. Liability issues are turning some away from the profession and private practitioners who shifted to working for someone else find their new conditions don’t mesh with their expectations, while increasingly complex technology has led older physicians to retire sooner.

Cavalieri says there have been “many attempts nationally and locally to try to address the physician shortage.” For medical schools providing both undergraduate and graduate education, that means training prospective doctors to meet their communities’ health care needs, creating more educational opportunities and producing more physicians, all while trying to guide them toward the fields most in need of new practitioners.

However, the lengthy pipeline between finishing undergraduate studies and the completion of a hands-on residency program means it can take anywhere between 7 and 10 years on average for a student of medicine to become a practicing doctor.

Cooper Medical School’s Dean of Medicine Dr. Anette Reboli says the school’s 2009 inception is a direct response to the doctor shortage. It has introduced a three-year expedited program that attempts to hasten the process without compromising a quality education. Students can complete their residencies with all the requisite training at a reduced cost, in an effort to create more primary care physicians.

Reboli adds that infusing diversity into the pool of potential physicians is also crucial. She and Cavalieri say that the number of Black men going into medicine has remained flat for about 10 years, while most minorities remain under-represented among medical students. But Reboli also notes that the numbers of Black women entering medicine are optimistically on the rise.

“Our goal is to be sure that our physician workforce is diverse and represents the communities that we serve,” Cavalieri adds.

With doctors beginning their careers deeply in debt from med school, those early expenses can be prohibitive for prospective students. Scholarships, hospital-funded grants, capped tuition rates, loan-forgiveness programs and even state legislation are all attempting to make medical education more accessible to the best and brightest from lower- and middle-income homes.

Many New Jersey residents attend medical school in their home state and do ultimately stay where they studied, and both Cavalieri and Reboli say that partnering with area hospitals has helped entrench students in local medicine to ensure even more med students become New Jersey doctors.

The pandemic itself underscored the importance of technology in the medical field, with remote learning as the obvious first stop. It also familiarized students with telemedicine, which Reboli says is the apparent future and means “they’ll probably never have a snow day again.”

Optimistically, though, the pandemic has also encouraged a dramatic uptick in students considering a career in medicine.

“The number of applicants has skyrocketed,” Cavalieri confirms.

He reports that the 2021-’22 school year has 216 open spots for students, which drew 7,000 applicants—a 26% increase from the previous academic year, compared to the national average of medical schools seeing 16% more applicants in that same time frame. Rowan is working toward accommodating 275 students per class starting in July 2022, as well as adding educational space to a Gloucester County campus medical facility already seeing patients.

One thing hasn’t changed, though: While New Jersey schools endeavor to not only fill critically understaffed areas of medicine but also retain locally educated doctors, they also reinforce the importance of people skills, cultural awareness and cultivating a warm bedside manner.

“They need to be able to care for the diverse populations within our state, so we want them to be skillful, culturally competent, compassionate physicians from diverse backgrounds, and they need to be leaders in their communities,” Cavalieri says. “So that’s kind of our mission. That’s what we’re doing and we’re working hard at it every single day.”

Reboli says that the next generation of doctors has demonstrated a heartening trend of proactive community involvement, especially during the pandemic. From organizing blood drives to serving as family liaisons for patients who can’t see their loved ones, their dedication to serving the South Jersey community has been exemplary—to the tune of a combined 18,000 hours of community service since March 2020.

“They have stepped up without being asked,” she says. “I am so proud of our students.”

It’s not just doctors who are feeling the crunch. Nurses, too, have been facing their own shortage for years, also compounded by COVID-19.

Debbie White is president of Health Professionals and Allied Employees, the union representing more than 14,000 nurses and health care workers across New Jersey. She has been speaking about the dearth of registered and licensed professional nurses for years, issuing warnings about the compromised quality of care patients will face if those numbers create a critical void in care.

“I saw an estimate that said when COVID is done, we are going to be 11,000 nurses in the red,” White says. “Nurses are leaving the profession, they’re retiring early; we have lost seven members to COVID.”

Improved working conditions are key to keeping nurses in the field, which White says starts with unions.

Unlike doctors, the amount of nurses ebbs and flows, but the overabundances never last long. COVID has made the current nursing shortage more pronounced, and White doesn’t see that changing until their voices are heard.

“Physically, they’ve been assaulted because of this pandemic. They’ve had to do their job while worrying about transmitting a virus to their families,” she notes. “What we’ve seen is that health care workers have been exposed and infected at a much higher rate than anyone else. The only thing that will keep nurses in the field is better, safer working conditions.”