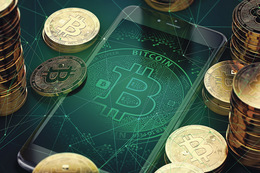 Cryptocurrency: Seeing Through the Hype
How a currency built on anonymity and algorithms went from the basement to the mainstream, and what it could mean for your portfolio.

When Bitcoin hit a record-high price of almost $20,000 per coin in 2017, the world took notice, but then quickly dismissed it as a fad when its value shrank over the next few years. Fast-forward to today, and cryptocurrency remains in the headlines due to its volatility and piques the interest of the masses when successful entrepreneurs such as Elon Musk and Mark Cuban openly embrace it. Back in April, Coinbase, a platform dedicated to trading cryptocurrency, was the first company in that industry to go public in the U.S., sending Bitcoin’s value soaring.

However, the more attention being paid to this digital currency, the more regulation it could incur from governments. China has been cracking down on mining operations and here in the U.S., the House of Representatives has announced the development of a working group to examine the issues associated with “digital assets.” The world can no longer ignore the impact and potential—both good and bad—of cryptocurrency, but while some may want to jump on the bandwagon, like any other speculative market, due diligence is key.

To the casual observer, cryptography-based money may seem like something that’s only been around for a few years, however, the concept goes back decades. Attempts were not successful due to the requirement of a central party that would maintain people’s balances, which left the door open for government interference. Bitcoin’s invention in 2008 was the first successful iteration.

“While the Bitcoin system used a lot of building blocks invented/proposed earlier, through the invention of the proof-of-work based blockchain to serve as the decentralized core of the system, the need for a trusted third party was eliminated. A cryptocurrency for the first time could just be a community-run open source project,” says Daniel Folkinshteyn, Ph.D., associate professor of finance at Rowan University.

Explaining how currency is created through the blockchain can be a bit technical (read: nerdy). A digital ledger of records called blocks records transactions across computers. This network of computers works together to solve equations and confirm the transactions’ validity. Once confirmed, they are put into blocks and chained together to form a permanent history of transactions, all of which are anonymous. Currency is generated by “miners” who solve complex hashing puzzles and verify transactions, for which they are paid in bitcoins. But, since the average person doesn’t have the computer capacity to constantly mine, cryptocurrency can also be purchased on an exchange using regular money.

Although the original, Bitcoin is not the only player in the market. As Folkinshteyn says, “Since the code of Bitcoin is open, anyone could just copy it, change a few strings, and make their own new cryptocurrency using the same idea. This has in fact happened thousands of times over the past decade, with various twists on the original design.”

Known as “altcoins,” these Bitcoin alternatives share the same core framework, but aim to make adjustments or improvements and perform different functions. Some of the more well-known ones include Dogecoin (Musk’s perceived favorite), which was created in 2013 and recognized by its Shiba Inu logo, and averages about $.10 in value—a number that sometimes rises depending on Musk’s Twitter activity. Ether, the currency of the platform Ethereum, is a big piece of Cuban’s diverse bitcoin portfolio.

NFTs (non-fungible tokens) are the latest cryptographic asset. Not a currency, NFTs certify that a digital asset is completely unique. They can represent photos, art, audio and more.

With big names touting their involvement and belief in the future of cryptocurrency, it’s only reasonable for the general public to want in on the action.

“In general, I will say that this is a relatively new space, and as with any new technological development, there is a lot of potential reward, but also a lot—a lot—of risk,” says Folkinshteyn. “Think [of] the dot-com years in the 1990s, and further back in history, perhaps the stock market mania in the 1920s, just prior to the great crash and the following Great Depression, canal mania in the late 1700s, the railway bubble of the mid-1800s, and many others. Fact is, most people lose money in these times, since most people get in at the top of a speculative frenzy.”

There are some things to keep on your radar if you’re interested in investing in crypto, he continues. First being data security. “The basic structure of these things is that they are a bearer asset—whoever controls the secret key that is assigned some coins, can spend those coins. If you lose control of the key (such as, your computer gets hacked, you write it on a sticky note and someone sees it, your computer explodes and you have no backups, you store them on some seedy exchange and it up and disappears one day, etc.), you lose your assets.”

Folkinshteyn says it’s easy for people to fall victim to scams at a time like this. “If you have no experience trading, don’t jump into day trading cryptocurrency, any more than you should do that with stocks. Do not invest more than you can afford to lose. There is hype everywhere; if you do not know enough to see through the hype, do not give them your money. Assume everything is a scam, until convinced otherwise.”

The government is also trying to curb fraud related to Bitcoin and its innate lack of regulation is an invitation for corruption, as was stated in a report by the New Jersey Commission of Investigation. Released in February, the commission investigated Bitcoin ATMs where people can conduct cryptocurrency transactions and found instances of fraud. The group recommends requiring an ID to conduct any transaction and that businesses should have a license to operate an ATM. Legislation in Trenton is currently being considered that would protect consumers and bring a level of oversight to these transactions.

“A lot of existing regulations do apply to cryptocurrency, such as anti-money laundering and know-your-customer regulations for cryptocurrency exchanges, tax rules for profits/losses, securities laws for offering tokens to the public, etc.,” Folkinshteyn says. “There are many ongoing discussions, in many countries across the world, as well as in many states of the U.S., for various cryptocurrency-specific regulations. It is a rapidly changing landscape.”