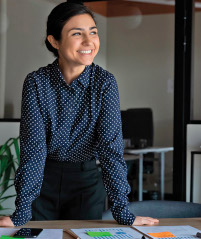 Greener Pastures
Job hopping has become more prevalent as employees are seeking higher salaries and more fulfilling experiences, and the pandemic may speed up the process.

As an organizational psychologist and a professor at Rowan University, Valerie LaMastro, Ph.D., has long been intrigued by workplace dynamics and the relationships between employees with their managers and their jobs. It is a topic she has studied for years in her professional life, but her interest was actually piqued much earlier, in her own household growing up.

“I think was fascinates me the most is how people go to work and tolerate doing something they really don’t like on a day-in, day-out basis for so many years,” she says. “When I was a kid I saw how much my father disliked work, how he resented work, and I thought, there’s got to be a better way to make work compatible with life and have some sort of balance between being a productive employee and being a generally happy person. So I find work fascinating and considering how much time we spend at it, I can’t think of a better thing for a psychologist to study than how to make it better.”

In her father’s generation, and even her own, terms like “job satisfaction” just were not part of the everyday lexicon. Even people who hated their jobs tended to stay in the same place for decades, hardened by the mentality of punching in every morning and putting in an honest day’s work.

With millennials now making up the largest segment of the workforce, and Generation Z starting to enter it as well, that mindset has been turned on its head. Blind loyalty is no longer the default setting and job hopping has become more prevalent, with employees willing to move on to new opportunities after a year or two at a company if the salary, responsibilities and most importantly the job satisfaction do not meet their expectations.

“Nowadays you see people moving jobs more just for the experience,” says Hannah Dumas, marketing assistant at PCH Technologies. “It’s not so much of a thing where you want to stay in one place your entire life. The younger generation really appreciates experiences more so than material things and I think that translates to your job field as well.”

Bill Emerson has witnessed the evolution of job hopping during his tenure at Emerson Group, a staffing and recruiting firm started by his parents 50 years ago. He joined the family company in 1990 and is now the president.

“When I first got into the business, if somebody left a position after five years they were considered a job hopper,” he says. “Or if they had two or three jobs over a 20-year career, people thought they were job hoppers. Now, if they’re there for two years, that’s great. Part of that is people are looking to grow and looking to move, so the loyalty you used to see on both sides is not as great.

“That’s why it’s even more critical for companies to focus on knowing what their culture is, building that culture and hiring to that culture. If you’re able to do that—and it takes time—but going through that process will save you and help you make more money in the long run. If you have that stable workforce and it’s a workforce that loves to work for your company, it will show in their work and how they treat customers.”

LaMastro has seen job hopping trending for several years and says the United States is currently in a transitional phase. There is bound to be some push and pull between the old guard, who believe in staying at one job for a certain period of time, and the younger generations, who are determined to put a priority on their personal happiness.

The pandemic has only added to the debate. A recent Pulse of the American Worker Survey by Prudential found that 87% of people who have been working remotely wish to continue doing so at least one day per week post-pandemic, and 42% of those say if their company does not offer that option long term, they will look for one that does.

“[The pandemic has] made us rethink everything,” LaMastro says. “What I’m seeing is there’s an awful lot of people who prefer working from home a large percentage of the time, and there’s an equal number of managers who are eager to get people back on board because the productivity is suffering, or so they believe. I think it’s mainly because we really haven’t figured out how to measure productivity that well when someone is working from home as opposed to working in the office, so I think managers are nervous that people are maybe not focusing on their work as much as they should.”

LaMastro thinks working from home is here to stay, however, and if companies do not adapt, they likely will end up losing valued employees to job hopping. “Obviously, at some level this is a very privileged discussion to have, because if you’re an essential worker, if you’re a retail clerk or work in a grocery store, you don’t have these options,” she says. “But for professional and managerial people, I think a lot of us want to have a blend and the blend is leaning more toward being home.”

Aside from flexibility, money is still the main motivating factor in job hopping as employees use it as a path toward a higher salary. Other valid reasons include moving on from a toxic environment, seeking a company where there is potential for advancement or trying to use different skills.

Employees should be cautious about moving too frequently from job to job, though. There may come a time when a company has two equally qualified candidates for an open position, and the one who is more likely to stick around will probably get the nod.

“Obviously, if you’re hiring someone you like to see that they will stay at a company for a while. You want that loyalty to your company as well.”

LaMastro agrees and advises people to stay at a job for at least 18 months to two years if possible before leaving. She says IT is the one field she has come across where job hopping is not frowned upon, but Dumas has not seen that trend at PCH, which has had a 0% turnover rate over the past year.

“I think our industry actually retains people really well,” she says. “We have a couple of employees who have been on since the company started about 20 years ago and they’ve stayed with our boss the whole time. I think the cybersecurity industry is kind of a niche market in a sense. If you’re in sales you can do that anywhere, but if you know cybersecurity and do it well you can find a company you like and it’s worth staying on for in this industry.”

Still, the overall trend seems to be heading in the opposite direction, and perhaps that’s not such a bad thing. Companies will have to adjust their way of doing business in order to attract and retain the type of employees they need.

“That’s the one thing I love about working with college students, is they have so many big ideas about how the workplace should be, and once there’s a critical mass of them who are the employable individuals, things are really going to change in a positive way,” LaMastro says. “It will be a much more balanced and life-friendly way because they want work-life balance more than people in my generation, more than baby boomers were even allowed to dream of. We didn’t expect to have any and didn’t get any. The students these days are expecting to go out into the workplace and be able to flex their work around their life and not the other way around.”