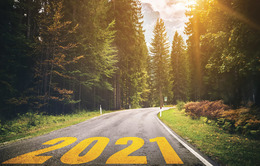 The Road Ahead
While there are a number of positive economic indicators on the horizon, weâre not out of the woods yet in terms of COVIDâs financial impact.

Masks are coming off. New Jersey schools are looking at a 100% in-person September. Doors everywhere are reopening. Life is returning to the region, and things are looking more and more like their pre-pandemic versions every day.

But things are fundamentally different now, as the wide divide between pandemic experiences starkly illustrates. Some businesses are gone forever and families are financially reeling from COVID’s heaviest hits, while other industries have accumulated work spilling beyond the calendar year and households are flush with a quarantine’s worth of unspent funds.

The banking and financial industries have to account for those extremes, as well as the range of experiences between them. With clients from individual account holders to massive corporations, those working in any industry adjacent to the economic sector have been helping all kinds of people not only navigate the pandemic but also prepare for what’s next, creating a mixed bag of an economic outlook.

“We always like to say that you should have a Plan B because there’s no guarantee that Plan A is going to work,” says John Herring, the New Jersey market president for Liberty Bell Bank. And amid an environment overwhelmingly referred to as an unprecedented one, having a Plan C isn’t a bad idea, either.

John E. McWeeney Jr. is the president and CEO of the New Jersey Bankers Association, which provides education to its members and connects them with constituencies like legislators, regulators, service providers, other members and more, all to best serve their customers and communities. With a wide-ranging vantage point, the association and McWeeney are afforded a broad perspective of the state’s financial sector.

And, to him, that bigger picture looks to be an overall optimistic one.

“As far as the rest of 2021 goes, I think the outlook is very positive for the economy, both locally and nationally,” he says.

McWeeney indicates some of the factors shaping his outlook: “There’s just so much money that’s out there. The PPP [Paycheck Protection Program] loans and the $26 billion to New Jersey businesses just from that, the stimulus checks, the unemployment benefits—there’s just a tremendous amount of liquidity in the system right now. … And as the economy reopens, the restrictions from COVID are being lifted, restaurants are getting back to 100% capacity and other businesses are opening. I just think there’s going to be tremendous economic activity for the near term.”

But he, and others, recognize that not every small business benefited from those loans, just as not every household found adequate financial relief from the government’s stimulus money.

“People who are living week to week, it’s been a struggle for them,” says Ren Cicalese, managing shareholder of Alloy Silverstein Accountants and Advisors. “I would think it’s going to be even worse than that after the PPP monies go away and the employee retention credit goes away. I think there’s going to be a lot of small practices out there that are going to be out of practice because they struggled through COVID.”

And some experts fear that fervently injecting the economy with those government-supplied funds will have an inevitable inflation fallout that’s tantamount to kicking a can down the road of delayed consequences until there’s nowhere left to go.

“I think inflation, at least in the near term, is here to stay. And it’ll probably start to affect your life more than it has in the last two decades,” posits John Torrance of Masso Torrence Wealth Management, citing an ongoing increase in the cost of goods and services. “We have people who own supermarkets, and they’re telling us their costs are going up, in some cases, 20 to 30%. In the supermarket business, that’s not something that they can not pass along to the consumer. They have narrow margins to begin with.”

Dr. Michael Busler is an associate chair and a professor of business studies and finance at Stockton University, and says local economies have already seen a downshift in spending at brick-and-mortar stores for years, shuttering all kinds of local businesses along the way. With the pandemic further driving up people’s reliance on online shopping, post-pandemic retailers and shopping malls should expect that their pre-COVID problems “are likely to get worse.” Inflation’s incoming impact is also among the dangers he warns of.

“Inflation, for the last couple of decades, has really been in the 2% range … and the Federal Reserve likes to keep it in that range,” he says. “Inflation is running at about a 6% annual rate for the first four months of this year. Now, the Biden administration says it’s only temporary, that as soon as the economy fully reopens then the inflation problem will subside, but I don’t agree with that.”

“In my opinion, the government has overstimulated the economy,” Busler continues, pointing to a growing deficit, which he says is on track to grow from this year’s $3 trillion to $6.5 trillion in another two years. He also cites the Federal Reserve increasing the money supply to a point where it’s gone up about 25% in the last two years. “I think they’ve pumped so much demand into the economy, we’re looking at a very severe inflation problem going on throughout this year, and maybe going forward.”

Busler, however, also anticipates that the rest of 2021 will see encouraging economic growth.

“Since things began to reopen, the economy has been growing exceptionally well,” he notes. “It looks like growth is doing well. For the rest of the year, the economy will probably grow at about an 8% rate, so we should see some of the best growth we’ve seen, really, in decades.”

Indeed, looking to the future does bring some tentative hope—comparatively more than most have felt since the early days of 2020, at least, even amid an unclear path ahead and previously unseen perfect storms.

“Everybody’s cautiously optimistic, but also concerned about the inflation side of things. I think the business community likes clear direction, so that they can plan accordingly,” says Herring. “I think the uncertainty is a little bit of an issue.”

“I think inflation will probably sort of plateau in 2022, and interest rates will, too, but your days of 2.5% on a 30-year mortgage are probably over,” Torrance ventures. “A lot of people ask us how the market reacts to things, but it’s a very unusual triumvirate right now in higher inflation, higher interest rates and higher taxes—that’s not something we typically see that often happen simultaneously.”

Cicalese notes that times of chaos and forced adaptation can actually be beneficial in the long run. After Hurricane Sandy unleashed its fury on South Jersey in 2012, Alloy Silverstein’s Cherry Hill office was without power for 10 days, which convinced Cicalese to move operations entirely to a cloud system. That set the groundwork for a quick transition to an all-virtual model in March 2020—and advantageously positioned the company to work with others who appreciate their tech-savviness.

“I realized that the same storm could hit my Cherry Hill office and my Hammonton office,” Cicalese says. “When COVID hit, all we did was flip the switch because we had all the resources already in place. We’ve gained six years of progress in six months because we’ve realized that being virtual means our market is not just the 080 zip codes: Our market is the U.S.”

And, as McWeeney notes, present circumstances might be a good time to benefit from changing loan terms, making them easier to pay back.

“From a credit perspective, it’s a great time for borrowers to restructure their existing debt,” he says. “There’s no reason for anyone to be carrying high-interest loans around when they can restructure them at a lower rate for a longer term and lock that in. With these signs of inflation that we’re seeing, I do think interest rates will be going up.”