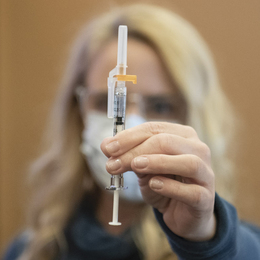 Hope on the Horizon
Although the fight against COVID-19 is far from over, health care officials are feeling more confident thanks to vaccine rollouts.

“I’m an optimist by nature and I do feel that the vaccine gives us hope,” Blaber says. “I do see that light at the end of the tunnel, but boy we have some hard times to go through before we get there. In the first half of January, our COVID numbers that are hospitalized continue to rise and I think they’re going to continue to rise for another couple of weeks. That’s going to put incredible stress on all the health care systems of New Jersey, so we’ve got to all keep wearing our masks, we’ve got to socially distance ourselves no matter how much we’re yearning to get together with friends and family, and then all of us [should] get vaccinated. If half of us get vaccinated and half don’t, then COVID is not going to be going away as quickly as we like. The only way we can get back to normal is if nearly all of us decide to take the vaccine.”
Click here to subscribe to the free digital editions of South Jersey Biz.