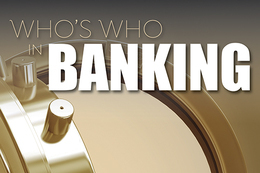 Whoâs Who in Banking
A look at 23 of the regionâs top senior executives putting their stamp on the industry.