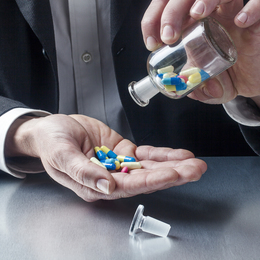 Drugs in the Workplace
From medical marijuana to opioid abuse, drug usage is front and center in today's world. How are companies tackling this issue and what steps can business owners take to manage employees who test positive?


by Jennifer Lesser
As the United States continues to face an unprecedented opioid epidemic and more and more states are legalizing the recreational and/or medicinal use of marijuana, South Jersey employers have had to deal with an array of issues related to drug usage within their workforce. From establishing new drug-testing policies to comply with changes in the law to training management on how to recognize symptoms of a drug problem, the region’s employers are navigating new challenges when it comes to preventing and handling issues of potential drug usage among employees.

“Research tells us that 70 percent of individuals with some type of substance abuse issue are employed. So that tells you employers need to be concerned,” says Angelo M. Valente, executive director of Partnership for a Drug-Free New Jersey. He notes that with issues ranging from lost productivity, increased absenteeism and utilization of sick time to higher turnover rates and theft in the workplace, substance abuse and misuse costs American businesses and organizations an average of $81 billion in lost profits every year. The industries at the top of illicit drug use and heavy alcohol consumption are both the construction and food services/accommodations businesses.

“Additionally, data from national drug testing in the workplace has us at our highest rate for positive tests in 15 years—the major factor for that increase is that more employees are testing positive for marijuana,” he adds.

This July, Gov. Phil Murphy signed into law the Jake Honig Compassionate Use Medical Cannabis Act, which significantly expanded the state’s medical marijuana program. According to Valente, now more than 60,000 New Jersey residents are receiving permission to use medical marijuana—and, of course, many of these people are employed. “Businesses need to revise their policies and procedures to adjust to this legislation,” he says. To that end, Partnership for a Drug-Free New Jersey provides a quarterly update and bi-monthly news feed that focuses on complying with state law and guidelines.

“The legalization of marijuana for medicinal and recreational use has increased concerns for both employers in New Jersey as well as throughout the country. They’re faced with addressing the usage of a drug that’s historically been illegal, and now it isn’t—and they're unsure how to deal with it,” explains John C. Kutner, partner at Weber Gallagher. He notes that an annual analysis by Quest showed that the number of positives for drugs in the workforce nationwide reached a 14-year high of 4.4 percent, and that rates of marijuana positivity in test results increased across nearly all workforce categories. Since 2014, positive results for marijuana jumped by 17 percent.

However, he notes that the law does not provide protection for employees who arrive to work under the influence or who are in possession of drugs in the workplace. Other caveats that employers should understand are that organizations that receive federal funding are still required to comply with the Drug-Free Workplace Act—and hiring someone who uses drugs could jeopardize their federal funding. Department of Transportation (DOT) employees also have their own set of regulations that must be adhered to when it comes to a drug-free workplace.

And the potential legal issues don’t end there—the fact that there’s still no test available that accurately provides an indication of the current level of marijuana intoxication has also created headaches for employers. “Unfortunately, social policy has gotten ahead of the science. Since marijuana can remain in your system for two to four weeks, someone who smoked at home legally two weeks ago can test positive on a drug test … but it’s clearly not an indicator that they’re currently intoxicated in the workplace,” Kutner says. It’s for all of these reasons that he recommends that all businesses consult with a lawyer for guidance on these issues and take steps such as updating handbooks and educating employees on any changes to drug testing policies, as well as properly training management on approaching an employee suspected of a drug problem.

The more widespread usage of marijuana is also impacting local employers’ hiring processes. Valente notes that some employers are finding it difficult to fulfill certain positions because an increased number of applicants are testing positive when they undergo pre-employment testing; meanwhile, a report from the Federal Reserve also notes that opioid abuse has increased the number of American adults either unwilling or unable to work. “This is particularly apparent to employers competing for workers in a low unemployment market,” he adds.

As a result, many employers are making the decision to remove marijuana from the drug screening process. “So many in the applicant pool are testing positive, and that’s really narrowing down their pool of people to choose from—and that’s a big problem for employers,” Kutner adds.

Like businesses across the country, South Jersey employers are also grappling with the nationwide opioid crisis. According to Susan A. Gibson, special agent in charge of the Drug Enforcement Administration’s (DEA) New Jersey Division, the opioid epidemic has affected the entire country, and New Jersey is losing more than 3,000 people a year to opioid use and overdoses. She notes that New Jersey’s location between major source cities like New York and Philadelphia is contributing to the expansion of the opioid problem in our state, as well as proximity to mass transit which allows an easy influx of drugs in and out of the state. “We do have a drug problem here in New Jersey,” she confirms. “The DEA has been trying to get the word out that the dangers of drugs are real. … The wrong amount of Fentanyl added to anything can become deadly, and this is what we’re battling right now.”

Additionally, Gibson notes that the misuse of opioids has affected all geographical areas, and there doesn’t seem to be boundaries when it comes to factors like ethnic background or income. As such, Gibson recommends that employers be cognizant of various signs to look for within their workforce—beyond the typical urine test—including indicators such as drowsiness, rapid weight loss and a change in personal hygiene. The symptom of a potential drug issue that may impact employers the most is theft in the workplace. “In order to feed their addiction, employees need the funding to support these habits … so instances of theft at work or employees who are suddenly experiencing financial difficulties like not being able to afford their car payments are potential indicators,” she adds.

Additionally, employers should also educate themselves on how to safely and legally handle an employee if they’re suspected of a potential drug issue, or if drug usage should occur within the workplace. It’s also imperative that employers devise a comprehensive and well-written policy in their efforts to promote a safe and healthy workplace environment. “While large businesses often have a human resources department to handle this issue, the small business owner struggles to find time and may lack the staffing to put a comprehensive policy in place,” Valente says.

When it comes to establishing those policies, Greg Yowell, founder and owner of Delaware Valley Mobile Drug Testing, LLC, recommends that employers keep their regulations as straightforward as possible and try to address every scenario as it relates to drug testing—they should outline the drugs they’re going to test for, in what scenarios they’ll be testing and actions that will be taken for positive results. Employers should also include resources that will be provided to help address an employee’s substance abuse issue.

“For the small family business that grows and starts hiring additional employees, if you don’t have these types of policies in place, you will eventually have a problem,” Yowell adds. “If you haven’t properly established policies and procedures as it relates to drug testing, and an employee decides to take legal action against you should they have a positive test and you take disciplinary action, you will absolutely lose in court.”

The good news is that any business, large or small, can take advantage of resources such as the Partnership for a Drug-Free New Jersey Drugs Don’t Work in NJ program for free, and gain access to materials including a digital tool-kit with guidance on policy development, supervisory training, education for employees and employee assistance, as well as guidelines for initiating a drug-testing policy and technical assistance to establish or update current policies.

“We receive calls every week from companies that have an employee who appears intoxicated and they don’t know what to do—and the problem is that if you’ve reached that point, it’s already too late,” Yowell says. “Drug-related policies need to be clearly included in your handbook and shared in an upfront and direct manner from the moment an employee completes their on-boarding process with you.”

Employers are also playing an important role in prevention by providing education on substance abuse for their employees. “When it comes to education, lots of things can be done at little or no cost— participating in Alcohol Awareness Month in April, putting up posters, providing educational inserts with paychecks and conducting educational programs are some possibilities,” Valente says. “The research shows education needs to be done on an ongoing basis. It can’t be just a one-shot deal. And it works better as one component of an overall health and wellness program for your employees.”

Ultimately, South Jersey businesses will need to remain vigilant when it comes to tackling issues like the legalization of marijuana and symptoms of opioid addiction within their workforce. “At the end of the day, it’s about safety,” Yowell concludes. “And if employers do their part to provide education and resources for employees to get help when they need it, they can feel good about knowing that they not only saved someone’s job—but they probably helped save their life.”