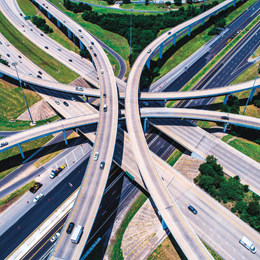 After starting the fiscal year last summer without any money allotted for road, bridge or mass-transit improvements, New Jersey is now in the process of spending a record $2 billion. In part due to $400 million in supplemental appropriation approved in March, this drastic and necessary change is intended to overhaul outdated infrastructure and transit systems over the next eight years.

“Over a 10-year period, ridership on three of the most heavily used transit systems in New Jersey (NJ Transit, PATH and PATCO) increased by over 16 percent in spite of the recession and Superstorm Sandy service outages in 2012,” states the report. “The increase in ridership has subjected the system to significant strain, with the core system at or near capacity in peak hours and key segments of the system, particularly the trans-Hudson rail and bus infrastructure that [carries] passengers between New Jersey and New York City, are near capacity and simultaneously in need of major rehabilitation and expansion.”

When the Transportation Trust Fund (TTF) ran out over the summer of the same year —causing a statewide construction freeze that stalled more than 1,000 projects and stopped crews from completing key improvements—the state faced a funding predicament. New Jersey wasn’t alone; a shortfall of transportation funding at federal and state levels across the country caused many states to reassess resources. After much deliberation, a bipartisan deal increased the state’s tax on gas, which funds the TTF. The tax increased by 23 cents a gallon, to 37.5 cents, a steep spike that cost the state its reputation as the second-lowest in gas taxes in the nation in exchange for more funds. But would it be enough?

In March, Gov. Chris Christie answered by signing legislation that boosted the state’s transportation spending by $400 million. After initially calling for road and bridge funding in his annual budget address, the legislation he signed ultimately allocates $260 million for roads and bridges as well as an additional $140 million for New Jersey Transit. In total, this raised the state’s current fiscal year TTF from $1.6 billion to $2 billion, a record spending level that is set for the fund for the next eight years.

Senate President Stephen Sweeney says every dollar spent from the TTF will generate $2.35 in economic activity, spurring an estimated $4.7 billion of economic activity each year from the sustained investment. It will also create more than 34,000 jobs with annual payrolls of $1.4 billion. He says South Jersey will be positively impacted by this in several ways. “We will invest in roads, rail lines, ports and other transportation priorities for the region,” assures Sweeney. “We will make sure that South Jersey receives its fair share in transportation aid. In fact, under the renewed TTF, South Jersey will receive more transportation funding than ever before.”

According to Lisa Torbic, senior public information officer for New Jersey Transit, eight safety and technology projects will be funded by the additional $140 million and rolled out over the course of the next year. Of particular note is an enhanced MyTix electronic, mobile ticketing application that will increase functionality and intermodal ticketing options for its 1.5 million users.

In addition, with the delivery of new 40-foot cruiser-style buses, cameras with 360-degree views will be installed to enhance driver visibility and minimize potential for pedestrian collisions. This enhances the current TTF-funded pro - gram where buses are currently being retrofitted with the cameras.

In terms of system expansion projects, the corporation is also preparing to commence preliminary engineering and design on a significant expansion: the long-awaited Hudson-Bergen Light Rail Route 440. In South Jersey, the line would run from Glassboro to Camden. Sweeney adds that some upgrades for the Salem County Short Line Railroad Port Area are already underway, too.

“This is a key investment in the infrastructure that will make upgrades and improvements in support of the transportation system that fuels our economy,” says Sweeney. “It is an investment that will create jobs, fuel immediate and long-term economic growth, improve the quality of life for motorists and commuters, and provide upgrades to the transportation infrastructure that is the backbone of New Jersey’s economy. We are a logistics state and transportation is a key component for keep - inggoods and services flowing.”

Burlington County—the largest county in New Jersey by geographic size, including 412 bridges and 508 center-line miles of road—will also benefit from the increase in funding. According to Bruce Garganio, Burlington County freeholder director, the area typically receives $6 million from TTF and they primarily use the funds for road overlay projects. However, now the Freeholder Board and their engineering department will be able to evaluate all bridge and road projects in the county based on the increased funding.

“Any transportation improvement that facilitates easier and more efficient movement of people and goods will have a positive impact on the local and regional economies,” says Garganio. “Reducing congestion reduces transportation costs (time and fuel) for freight movement, businesses traveling to provide services, patrons and customers traveling to stores and shops, and commuters traveling to and from work. These lower costs contribute toward keeping operating costs lower for businesses and add to the attractiveness of businesses locating in Burlington County, as well as preserving the quality of life for employees who live in the county commuting to these businesses.”

Sweeney says these are just a few of the many positive changes resulting from the record budget, which will hopefully improve New Jersey’s ASCE report cards moving forward, too. “This is just the beginning of what we will be able to accomplish in the years ahead.”