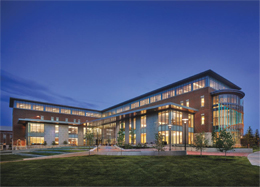 The transformation in Glassboro seems to have taken place very quickly. But the work has been going on behind the scenes for over a decade. “The developments that are happening in Glassboro in terms of industry, research and development, health care, job creation and education really have been going on for about 15 years with help from the state and the federal government as well as the freeholders,” says Gloucester County Freeholder Heather
Simmons.

Borough Administrator/Executive Director of Economic Development Joseph Brigandi Jr. explains how it all began, “In the ‘60s and ‘70s, Glassboro was a small teachers’ college. The downtown was actually a thriving business district,” he says. “As time went on and sprawl occurred and the malls opened up, at the same time, the downtown started to go downhill and unfortunately, wasn’t a safe place for a number of years.”

A Fractured Past
Back then, the school and the borough operated very separately from one another, as was commonplace in the late ‘80s and early ‘90s. “All the universities were the same, sort of walled off from the community. In our case, it was a literal wall and a mentality that off campus, they deal with it, on campus, we deal with it. It wasn’t until the borough saw that the town was in bad shape and we saw that our futures are intertwined and we have to do something together,” explains Rowan University Vice President for University Relations Joe Cardona, Ed.D.

During that time, the school was able to fund an intern to work downtown on economic development issues, which led to a conversation about how the school and Glassboro could work more closely together.

Since then, the leadership at the university and the leadership of the municipality have really worked together. “I know the mayor is famous for saying, ‘As goes the municipality, so goes Rowan and vice versa,’” says Simmons. “With visionary leaders on both sides of that equation over the last decade, we’ve really been able to see a lot happen that might not otherwise have been possible.”

When Rowan received its research designation and enrollment increased, new needs presented themselves and new opportunities arose. “With that opened up opportunities for research and development and private industrial investment in the region because you have an educated workforce in close proximity to a company itself would be the opportunity for campus research, grant opportunities and further development of the employee base,” Simmons continues.

A New Perception
The concept of a new downtown Glassboro that would connect the campus with the residential part of town began to take shape. “We got a number of planning grants from the Delaware Valley Regional Planning Commission and the county and some other entities. We hired some planning consultants to help us through a community process and help us figure out what do we want to be as we are redeveloping the area,” says Brigandi.

The school worked with a number of developers in the beginning to plan out a strategy, acquiring more than 90 properties in the area, but with a plan to recoup the funds. As each phase gets built, the developer pays back the cost of acquiring and developing the land. “So, it doesn’t cost the taxpayer anything. We’re taking in a lot more ratables and revenue and have a lot more stable area than we used to,” Brigandi explains. This is where the concept of Rowan Boulevard began. “We had to build our own city and that’s what Rowan Boulevard looks like now. The idea behind Rowan Boulevard was a partnership between three different organizations and that the benefits are long term, not right away,” Coradino says.

Navigating the Landscape
This past year was the most productive in the history of the university in terms of new construction. Four new buildings have been opened with more slated for completion this year and into 2018. This is also the first full year that the first phase of the Town Square has been useable. “We’re in the process of planning and raising funds for the second phase, which includes plans to have a fountain and a pavilion for the arts,” says Brigandi. “Community groups are also talking about the possibility of a seasonal ice rink. We’re also talking about some other artistic things. We’re well on our way. We just got awarded another $1 million grant for the second phase and we should be starting sometime this year and should finish up next year.”

Additional developments continue to take shape as well. “Moving forward … we have some projects underway on the west campus, 600 acres on the corner of Route 322 and 55, we just sold 100 acres of that to Inspira hospital. We’re excited about that and to partner with them on health science issues and projects,” says Coradino. “There’s still a lot for the university to do. … But this year will not be matched.”

Of course, with growth comes another set of challenges, which include increased traffic and a need for additional facilities. The newly approved Inspira hospital on 322 will help provide medical care for students and residents alike. And housing construction for both students and young professionals continues to expand. Here, student housing is designated specifically for Rowan University students. That allows them to live in close proximity to the school, but keeps them from renting in town.

In the coming year, the state will provide some funding through the county and with the municipality for the beginning stages of planning for traffic along 322, explains Simmons. “Already, residents in the area and of course students, realize that the traffic is crazy. It’s overwhelming. This is the problem the county and the borough are really taking the lead on and have received some funding from the state for assistance,” she says.

Renewed interest in the Glassboro- Camden rail line could help that, too. “The last stop will actually be behind the businesses on East High Street … I think that’s going to be a real boon to the area and help develop the transit-oriented development on that end of the downtown and hopefully more people will want to live here and we’ll have less cars,” says Brigandi.

Stronger Together
All of these developments have taken shape through partnerships and a shared vision for a brighter future. “I think the important thing to note is that you’ve got a real synergy in Glassboro,” Simmons notes. “There’s a lot of visionary people in education, health care, governments of all different levels and they’re all working together and understanding that there’s a real opportunity here and that’s what’s happening.” Brigandi echoes that sentiment. “Little by little, it’s heading where we need it to be. It’s been a long process and we have a ways to go, but we’re excited about where we are headed. As Rowan continues to grow, we’re trying to work with them and make sure they grow in the right way and that we grow in the right way.”