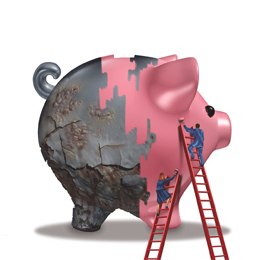 While the changes in the political landscape – both domestic and international – prompted feelings of uncertainty in 2016, business optimism has surged in recent months.

Economic policy changes, paired with the Federal Reserve’s raise of its benchmark rate for the second time in three months, has bolstered the outlook of mid-sized companies hoping for an upswing in the nation’s economy. In fact, 44 percent of middlemarket firms recently surveyed by M&T Bank believe the economy has improved in the past six months, and 70 percent expect the economy to accelerate by the end of Q2—the highest business poll reading since the recession. Capital investment plans for mid-sized businesses also improved, with a net 42 percent planning to hike capital expenditure compared to 35 percent a year ago. Results from the 500 mid-sized businesses surveyed across M&T Bank’s Mid-Atlantic footprint show that health care costs, government regulations and tax rates were among the biggest challenges for businesses.

Despite business optimism, the economy’s fundamentals mostly remain the same. In addition to the obvious fear of regulation and rising business costs, Mid- Atlantic business owners admit they have trouble hiring and retaining qualified employees. On net, only 26 percent of survey respondents plan to increase hiring this year, down slightly from one year ago.

In New Jersey, the state’s unemployment rate reached a 10-year low in the first quarter of 2017—recorded at 4.4 percent in March. With several large projects on the horizon, including Mantua Township’s South Jersey Technology Park, which will likely create more than 200 high-technology jobs, a reported influx of large businesses to Camden’s waterfront and Atlantic City’s redevelopment, South Jersey is predicted to see improvement in its local economy.

Across the river, Philadelphia’s Navy Yard has served as a huge sector for job growth in the region, employing more than 12,000 residents and 152 companies.

According to the U.S. Bureau of Labor Statistics, total nonfarm employment for the Philadelphia, Camden and Wilmington areas stood just below 2.9 million in February of this year, up 2.3 percent over 2016. Camden saw 18,900 jobs added in nonfarming industries, creating 19 percent of the metropolitan division’s local employment. Its largest increase, 5,200 jobs, was seen in the trade, transportation and utilities sectors.

Tax incentives offered to businesses in Camden will likely continue to attract companies to the city. In the first quarter of 2017, three South Jersey companies received approval from the state Economic Development Authority for $245 million of tax incentives in exchange for their move to the waterfront. This move is projected to bring 900 jobs to Camden and improve the local economy with professionals commuting to the city regularly—an additional boost to the tax breaks that are geared to spur growth.

And, while survey respondents’ outlook for rental rates was somewhat more downbeat compared to a year ago, with 15 percent of respondents expecting rates to fall, the state’s booming Shore culture shows otherwise. Recent figures show the state’s tourism economy has grown with overall spending reaching $43.4 billion in 2016 with the addition of new homes, developments, restaurants and summer attractions along the coast, therefore repositioning New Jersey’s beach towns as attractive, affordable vacation areas once again.