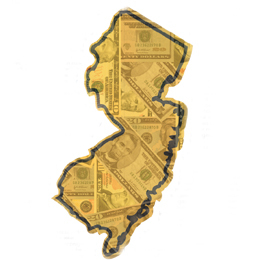 
by Jennifer L. Nelson
Earlier this year, Goldman Sachs entered into a $5.1 billion settlement related to its role in the subprime mortgage crisis. Under the terms of the agreement, the firm will pay $2.385 billion in a civil monetary penalty, make $875 million in cash payments and provide $1.8 billion in consumer relief. As such, each affected state will be granted settlement money to address the mortgage crisis that has been going on for eight years.

Itâs no secret that New Jersey remains at the top of the national list of âzombie propertiesââ commercial and industrial properties that are vacant or under-performing, or that are financially underwaterâand South Jerseyâs local leaders have myriad ideas in terms of how to best allocate any settlement money the state receives.

Though itâs still unknown how much money the state of New Jersey will receive from the Gold- man Sachs settlement, assuming that the Garden Stateâs share is some $100 million, Harold G. Cohen, co-chair of the Dilworth Paxson LLP banking and financial services practice group, strongly believes that the best use of the money would be strictly allocating it to address the mortgage bubble. âThe settlement should be split in two: half to assist qualified homeowners distressed by their current mortgageâanyone who is either already in foreclosure or genuinely seeking to avoid foreclosureâand half to assist buyers with the purchase of a first home,â he asserts.

To be qualified to participate in either program, he believes an applicant should demonstrate the ability from steady income to pay the principal amount of a mortgage equal to 70 percent of the current value of the house, with interest fixed at 4 percent, amortizing over 25 years but with a balloon after 15 yearsâsince most people sell their first homes within 15 years, he notesâas well as the ability to pay real estate taxes and homeowners insurance.

âBoth programs should also include some means for favoring military veterans and anyone employed by the municipality or county in which they reside ... and the funds should be administered by an agency independent of the state government with a board consisting of representatives from the financial community, public legal services organizations, low-income housing representatives, veterans, public service foundations and clergy,â he adds.

Indeed, many local experts agree that one of the best uses of the settlement money would be in supporting first-time home- buyers. âOwning a home is the American dream, but with regulations being as strict as they are, itâs a goal that remains very difficult to achieve ... and weâve continued to see home owner- ship drop over the last few years,â asserts Jeffrey Swartz, executive director of the Camden County Workforce Investment Board.

âWe need to have significantly more money availableâand relax some of the regulationsâin order to afford people the opportunity to purchase a home here in South Jersey.â

Of course, along with the inability of many South Jerseyans to come up with a down payment, the region is still overrun with the issue of zombie properties, which crop up when property owners donât have the funds to carry the mortgage debt and canât invest in capital improvements. These properties are typically boarded up with the grounds in disarray, and many have already gone through the foreclosure process and are bank-ownedâand may be listed on the market at drastically reduced prices. Additional issues arise when the new owners begin attracting tenants at lower rents, thus depressing the leasing market for neighboring landlords.

âItâs a significant issue for individual municipalities that simply donât have the resources to deal with these vacant properties,â confirms Art Campbell, president of the Camden County Regional Chamber of Commerce. If New Jersey is granted a significant amount of funding via this settlement, he suggests that the state should borrow from the mortgage modification process that was already employed by the Obama administration in efforts to save homeowners who were struggling in the tanking economy.

âI donât know that people have to reinvent the wheel in order to find a solution to the zombie property crisis. ... Thereâs already a potential solution to this problem,â he adds. The mortgage modification program considers an appraised value of a property and the income of the applicant in terms of a 40-year mortgage. If the applicantâs income and the mortgage donât quite match up, the government writes down the value of the home to be consistent with the applicantâs ability to make the 40-year mortgage payment.

âI know people who were temporarily out of work and suddenly couldnât pay their mortgage. They went into the program and now theyâre back on their feet with a six-figure salary, and didnât have to be forced out of their home or community,â Campbell says. âItâs a fantastic option when it works, and if youâre not going to demolish the property then the objective really has to be moving it into ownership status.â

In the case of properties that are currently uninhabitable, Campbell notes that municipalities should focus on investing the settlement money into rehabilitating the property. âThereâs a number of properties in urban centers like Camden that were probably built 100 years ago, and theyâre going to have to be knocked down,â he asserts. âPart of the settlement money could be used to help municipalities demolish entire sections of these properties and then make the real estate available to potential buyersâsome may end up as brownfields, but properties in residential areas could certainly be transformed into viable real estate.â

Lori Grifa, partner at Archer and Greiner, agrees that the best use of any settlement funding would be to invest in mortgage modification programs. She notes that there are homeowners who may be a few years behind on mortgage payments, but the bank hasnât gotten around to foreclosing them yet because of plunging property vales. âA house that was purchased for $300,000 in 2005 may now be worth $175,000. ... So thereâs really no viable exit strategy for anyone involved,â she says. As such, the settlement money could potentially be used to write down the mortgage to an extent where appropriate candidates for this program could remain in their homes.

âThe state has a very lengthy mortgage foreclosure process that can take several years... And a lot of residents donât realize that they can technically remain in their home until theyâre forced to leave,â explains Cody Miller, council president of Monroe Township. âSo when a property goes into foreclosure, the homeowners lease it because they think they have to, and then the property falls into disrepair. ... Meanwhile, the banks keep the properties out of circulation in the hopes that the market is going to improve so they can recoup their costs.â

Thatâs part of the reason why the allocation of the settlement money may be rife with other challenges. âWeâre talking about private penalty money thatâs coming from a big company like Goldman Sachs that has dirty hands in the housing crisis. ... And this private money needs to be allocated properly for those people who are in over their heads and fighting to stay in their homes,â Grifa says, citing a 2010 funding program from the federal government through the Department of Treasury called the Hardest Hit Fund.

âThe theory was that the federal dollar would make homeownersâ mortgage payments for up to two years while they worked on getting back on their feet,â she explains. âBut while banks were being paid with federal money, it did absolutely nothing to assist the homeowner. ... So when their eligibility ran out, many people werenât any closer to avoiding foreclosure. Meanwhile, their houses were so devalued and they were paying a mortgage that was so far underwater. ... And thereâs a limit to how long you can swim before you drown.â

Fortunately, there are municipalities throughout South Jersey that are already try- ing to address the issue of zombie properties and homes in foreclosureâand local officials agree that it would be of the utmost priority when allocating any settlement money. âOne of the most beneficial ways this money could be utilized is providing local governments with funding to maintain zombie homes in their communities so that they can ultimately become viable homes to be put back on the market,â asserts Gloucester County Freeholder Director Robert M. Damminger.

In fact, Gloucester County has pioneered a registry program for zombie homes with Community Champions, which established a database of abandoned properties with the mortgage holders on registered properties. The registration includes contact information that towns can use to reach someone if there is a problem with a particular property.

âZombie homes drag down property values and can be dangerous. ... And itâs often local taxpayers who pick up the tab for mowing the grass and dealing with any other maintenance issues,â Damminger adds. âThe goal is to get these problem properties cleaned up, address safety issues, and streamline the process of holding the parties responsible.â There are currently 17 municipalities participating in the program.

âWhen weâre talking about homes with windows broken and grass growing a foot high, it puts a major strain on the local pub- lic works department; thatâs why we also created a list of certified contractors who would deal with the maintenance of a property, or with the structure if the building is unsound... And weâre actually billing the banks for the maintenance of these properties,â Miller explains. In Collingswood, the mayor is also addressing the issue by making use of the 2004 Abandoned Properties Rehabilitation Act to take ownership of abandoned properties, renovate them, and then sell the properties.

âSome people donât like when the government gets involved, but when you have an abandoned house in disrepair, the value of the properties around it is also diminished and it puts a burden on the residents who have to live next door to a house like that,â Miller concludes. âThatâs why when receiving a settlement like this, itâs absolutely crucial that we use the funds adequately. ... And this money needs to go toward correct- ing this problem in our state.â