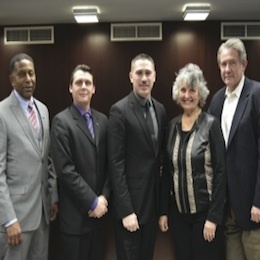 Last fall, Econsult Solutions, conducted a far-reaching study on the economic impact of Rowan University on the South Jersey region.

The study showed that, in communities where it has campusesâGlassboro, Stratford and CamdenâRowan is stimulating vast private investment, creating jobs, boosting real estate markets and offering a variety of services to the public, including medical care, education and arts and entertainment.

Statewide, Rowanâs impact is at more than $1 billion, according to the report. In Glassboro, home to Rowanâs main campus, the university has an annual impact of more than $108 million, supports more than 1,000 jobs outside of the institution and is a critical partner in the $300 million Rowan Boulevard initiative, a public-private redevelopment project that connects Rowan to Glassboroâs historic downtown.

The tenants on Rowan Boulevard include Inspira and Cooper Health Systems, Barnes & Noble and the South Jersey Federal Credit Union. Popular eateries Tony Lukeâs and Chickieâs & Peteâs announced last year they are coming to the boulevard.

In Glassboro, Camden and Stratford, the university is in the midst of $300 million in active design and construction projects, all of which provide construction jobs that stimulate the regional workforce and support the South Jersey economy.

Those projects include, among others: a $145 million, 1,400-bed housing complex for undergraduates adjacent to Rowan Boulevard, which is being built through the universityâs first-ever public-private partnership; a $70 million second building for the Henry M. Rowan College of Engineering; and a new, $63.2 million building for the William G. Rohrer College of Business.

Thatâs in addition to the universityâs purchase last fall of the 65-acre Rowan University Fossil Quarry in Mantua Township, which will be developed into a center of scientific research and discovery. The quarry, which contains beautifully preserved fossils from the heyday of the dinosaurs, will be a tremendous educational asset and will spur economic development.

Six months ago, I became dean of the Rohrer College of Business. I was drawn to Rowan because of its incredible momentum and its dynamic, forward thinking approach to education. That approach includes a firm commitment to serving as an economic engine in South Jersey.

Our new building will allow us to double our enrollment to more than 2,000 students and to provide them with an education that challenges them, mentors them, emboldens them, connects them with business leaders and provides them with the professional polish they need to stand out in a crowded job market.

To be sure, South Jerseyâs economic success depends heavily on business leaders who contribute to the lifeblood of the region through economic development, civic engagement, leadership, creativity and innovation.

Get Organized in the New Year
The hustle and bustle of the holiday season has passed. January is a great time to clear away the clutter and start 2016 with all of your information organized and at your fingertips. These gadgets are designed to help you do just that.

Executive Keyboard Tray
For a higher standard of comfort and maneuverability, the Fellowes Professional Series executive keyboard promotes neutral hand/wrist position while moving your keyboard and mouse off the desktop to save space. A simple one-handed motion instantly repositions keyboard height, and a single lever adjusts tilt by sliding from left to right.
(OfficeDepot.com, $299.99)

New Yearâs resolutions: So many of us make them, and the New Year is a great time to focus on self-improvement, whether you want to eat better or save more money. As business leaders, we should try to bring the notion of resolutions to our businesses, too. Increasing productivity in the workplace should always be a priority, and why not take the new year as an opportunity to renew this focus? John Garvey, senior vice president of wealth management with UBS Financial Services, Inc. shares his thoughts on the resolution to help increase productivity this yearâand how to stick to it.

1. SCHEDULE YOUR TIME. For projects that require a large portion of your day, block time off in your calendar. Booking your calendar can help you stay focused and help you dedicate the time needed for the task. New emails can be distracting and can throw off your productivity, so make a point to postpone checking email if youâre working on a deadlineâyou can always come back to new requests later in the day.

2. DONâT MULTI-TASK. While it may seem appealing to check several items off of your to-do list at once, multi-tasking is not the best use of your time. In fact, according to a 2006 article from the American Psychological Association, âMultitasking: Switching costs,â switching back and forth between several tasks at once takes a toll on productivity, and mental blocks that occur between switching tasks can waste up to 40 percent of productive time. Instead, focus on one thing at a time to improve efficiency.

3. COMPLETE THE HARDEST WORK IN THE MORNING. Stop wasting your most productive hours. The first two hours after fully waking up is the most productive time of day, according to Dan Ariely, a Duke University professor of psychology and behavioral economics. As such, you should focus your morning on your hardest or most time consuming tasks, rather than beginning the day with your easiest work.

4. DONâT BE A PERFECTIONIST. We all want to produce excellent work, but enough is enough. Instead of reviewing and re-reviewing several times, finish the task and consider it done. You might be able to better allocate that time toward another task, rather than looking for mistakes that likely donât exist.

5. STAY OFF THE INTERNET. From Twitter to personal email, weâre all guilty of wasting time online when we should be working. According to a June 2014 infographic by CareerBuilder and Harris Interactive, the internet is the third most common time waster at work. Whatâs more, the infographic shows that 21 percent of workers estimate they spend at least one hour each day on the internet for personal reasons. Imagine what you could do with that time if you focused on an item on your to-do list.

$5,000
Amount Investors Bank granted to The Bancroft School in Haddonfield to support a new dance program

3
New Jerseyâs rank among the hardest working states in the nation, according to Zippia, a website of career experts who utilize machine learning to examine career paths

Bowman & Company announced the hiring of Jeff Crosley as their new Marketing Coordinator. Crosley will work with the partners to develop and execute the firmâs marketing, growth and staff development programs.

The law firm of Sherman Silverstein announced that William Mackin, Esq. was recently appointed as Chair of the New Jersey Bankruptcy Lawyers Advisory Committee for a two-year term, after having served as the Vice-Chair of the Committee for the previous two years.

Carol Scott, who has served as President and CEO of AAA New Jersey since 2009, retired after a 28-year career on Dec. 31, 2015. David Antrilli, currently the Chief Operating Officer at AAA South Jersey, has been named as Scottâs successor.

United Way of Greater Philadelphia and Southern New Jersey (UWGPSNJ) recently appointed Mike Dinneen, senior vice president and director of marketing for Sun National Bank, to its Local Board in Burlington County. Dinneen joins other local volunteers to support United Wayâs Impact Fund to improve education, financial stability and health and to make sure people can meet their most basic needsâ food, shelter and safety.

Andro Zangaladze, M.D., Ph.D., has been appointed medical director of the Inspira-Jefferson Neuroscience Program. Double board certified in neurology and clinical neurophysiology and fellowship trained in neurophysiology, Dr. Zangaladze brings more than 27 years of combined experience in patient care, scientific research and academia.

Albert E. Smith has been appointed as the new Chairman of the Kennedy Health Board of Directors effective Jan. 1, 2016. Previously the Boardâs Vice Chairman, Smith is also a member of the Kennedy University Hospital Board of Trustees and served as its chairman from 2007 to 2012.

Inspira Health Networkâs LIFE Program has appointed Ankur Patel, M.D. as the programâs new medical director. In this role, Patel will provide medical oversight for the care of all Inspira LIFE program participants. Prior to joining Inspira, Patel served as the medical director for an Acute Care for the Elderly (ACE) unit in Newport News, Va.

Mount Holly Township announced the appointment of Jason Jones as the townshipâs new mayor and Richard DiFolco as deputy mayor at the Township Councilâs Reorganizational Meeting. Both Jones and DiFolco were unanimously elected to their positions by their fellow Township Council members.

Lauletta Birnbaum is pleased to announce the addition of corporate and securities lawyer, Eric D. Schoenborn, as a member of the firm. Prior to joining Lauletta Birnbaum, Schoenborn was partner with Stradley Ronon and served as the Chair or Co- Chair of the firmâs Public Company Practice Group for over nine years.