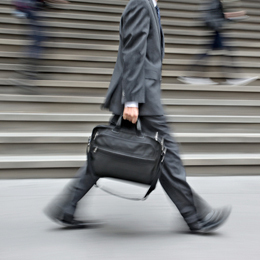 Republic First Bancorp, the parent company of Republic Bank, recently announced Vernon Hill as its new CEO. Hill, who also serves as chairman, will take over for Republic founder Harry Madonna. Madonna will remain as president and chairman emeritus of Republic First Bancorp. Hill, the founder and chairman of Commerce Bancorp, joined Republic in 2008 and has helped the bank grow from $700 million in assets to $5 billion.

Parker McCay recently added Matthew Arnold as an associate in the firm’s real estate department. Licensed in both New Jersey and Delaware, Arnold will practice out of the firm’s Mount Laurel office.

Barbara Pettit has joined Schwartz Financial Associates as its new director of financial planning and analysis. Pettit brings more than 15 years of industry experience to the job and previously worked with Vanguard and TIAA CREF prior to joining the firm.

Cooper Levenson named John A. Talvacchia a partner in its insurance defense litigation practice group. Certified by the Supreme Court of New Jersey as a Certified Civil Trial Attorney, Talvacchia will be based in the firm’s Cherry Hill office.

Nanette L. Horner, Esq. is the new vice president of legal and general counsel for the Hard Rock Hotel & Casino Atlantic City. Horner is an Atlantic County native with 25 years of experience as a gaming attorney, most recently working as executive vice president, chief counsel and chief compliance officer for Empire Resorts, which has casino and gaming properties in New York. She also spent seven years as an adjunct professor of law at her alma mater, Rutgers University School of Law-Camden.

Surety Title has named Casey M. Brown as its new COO. With more than two decades of experience, Brown will take the lead on managing internal operations and will be tasked with establishing a leadership development program. She previously worked with First American Title Insurance Company for the past five years, serving various roles including vice president and state agency manager for both New Jersey and Delaware.

Resorts Casino Hotel president and CEO Mark Giannantonio was named the new chair of the Advisory Board of the Lloyd D. Levenson Institute of Gaming Hospitality and Tourism (LIGHT) in the School of Business at Stockton University. The casino executive has been an active member of the LIGHT board since it was formed in 2010.

Les Cohen has retired as executive director of the Katz JCC, a role he has held since 1990. All told, Cohen has worked in the Jewish nonprofit sector for more than 45 years and he has played a pivotal role in helping the JCC expand its reach in the surrounding community.

Dana Lancellotti will join the New Jersey Restaurant & Hospitality Association as its new president and CEO. Lancellotti was formerly the director of business development and tourism for Ocean County and will replace the outgoing Marilou Halvorsen. Halvorsen is moving on to become the vice president of state relations and government affairs with the American Hotel & Lodging Association.

DULY NOTED
The South Asian Bar Association of New Jersey has chosen two attorneys from Stark & Stark to join its executive board. Bhaveen R. Jani was named president and Chinsu Shajan was named co-secretary of the board.

Kris Kolluri, president and CEO of Cooper’s Ferry Partnership in Camden, was chosen as one of the 25 business school graduates around the world to join the 2021 Class of Influential Leaders by AACSB International. Kolluri graduated the Rutgers School of Business-Camden in 1991, earning his bachelor’s degree in management.

Ken Richardson and Corinne Giletto of Vantage Commerical were honored as Power Brokers for Q4 2020 by CoStar, a commercial real estate information company. Richardson serves as Vantage’s executive director and Giletto is currently a senior advisor with the company.

Franklin Bank’s president and CEO Mark V. Edwards recently celebrated his 40th anniversary with the company. Edwards began his career as an accountant and worked his way up over time to eventually begin his current role in April 2020. Edwards serves on the Salem Community College Foundation Board and is president of the Lawnside Cemetery in Woodstown.