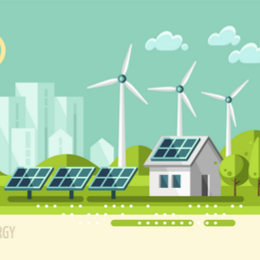 New Jerseyans overwhelmingly support renewable energy. According to results of a recent poll conducted by Fairleigh Dickinson University’s PublicMind for ReThink Energy NJ, nearly 90 percent of those surveyed feel renewable energy is important to the state’s overall health. And, despite currently ranking fifth in the country for installed solar capacity, three out of five individuals feel the state isn’t moving fast enough on related initiatives.

With such strong support from the public, Richard Lawton, executive director of the New Jersey Sustainable Business Council, says renewable energies are an area of opportunity for businesses to stand out from the crowd. “The benefits of a small business installing solar power include lowering operating costs and demonstrating the business’ commitment to sustainability,” says Lawton. “This can attract customers by further differentiating the business from its competitors.”

Last year, the state’s energy use breakdown was 56 percent natural gas, 39 percent nuclear and approximately 5 percent renewables; solar power alone provided more than 70 percent of all the renewable energy in the state. As it narrows in on its target to reduce 80 percent of its greenhouse gas emissions by the year 2050, New Jersey needs small businesses to invest in renewable energy in order to succeed. But are upfront costs worth the investment for business owners? Two solar success stories from South Jersey suggest the answer is yes.

Grounds for Success
Historically, high upfront costs to install solar panels discouraged both businesses and individuals from switching over. However, the maturation of the solar market (including overall increased volume of solar modules manufactured and sold) paired with an increase in demand by customers looking to do business with environmentally friendly organizations has greatly increased solar energy’s efficiency and viability. Solar is now considered by many to be a lowrisk, high-return investment.

“Investing in sustainable energy is a tangible way for a business to demonstrate that it cares about the impact it has on its customers, its community and New Jersey,” explains Lawton. “People are increasingly aware of the harmful effects of carbon pollution, and how investing in clean energy creates good-paying jobs that will help grow New Jersey’s economy. Consumers are rewarding businesses that are shifting from dirty to clean sources of energy, by voting with their spending dollars.”

Lawton says Melitta North America and the GT Timber Creek Solar Park are good examples of triple bottom line businesses, or businesses focusing on how their products and operations impact three tiers: profits, people and the planet. Their solar efforts are particularly notable.

Melitta has been roasting coffee in its 100,000-square-foot plant in Cherry Hill for more than 40 years. In August, the company announced the completion of a $1.3 million project to increase energy efficiencies by installing solar panels on the plant’s rooftop. Jeff Bridges, vice president of operations at Melitta, says the investment was an opportunity to help the environment while also fueling the company’s financial success. “In addition to reducing the environmental impact of our roasting operation, Melitta’s investment in solar energy reduces our costs for electricity and also generates income from the sale of Solar Renewable Energy Credits, due to the state of New Jersey’s support of such investments.”

Bridges emphasizes that while other projects may have higher estimated financial returns, the low-risk nature of solar power is too good to ignore. “The power output and savings are easy to estimate, installation and project costs are fixed and the equipment is almost maintenance-free with warranties that often exceed 10 years,” adds Bridges. “Solar is a win-win investment; good for the company, the community and the environment.” The plant has an estimated annual environmental benefit that is equivalent to 146 tons of waste recycled instead of landfilled, 458,732 pounds of coal burned and 10,866 tree seedlings grown for 10 years.

Building a Movement
Over the past decade, Gloucester Township has implemented several large-scale solar projects including 12 sites on government buildings, schools and landfills. The GT Timber Creek Solar Park is the largest grid-tied solar project in Gloucester Township— a partnership between the township and PVNavigator, Miller Brothers Design and Construction, Blue Sky Power and Marina Energy, LLC.

Marina Energy owns and operates the park, and they suggest its impact is threefold. First, because it repurposed a closed landfill (formerly the Owens Corning Fiberglass property), it capitalizes on what would otherwise be unusable land. Second, it provides lease revenue to the municipality without many of the negative effects commonly associated with new development such as traffic congestion, increased reliance on municipal services and an increased strain on the local school system. Third, it lessens the strain on the local energy grid, especially during times when usage is at its highest such as a hot summer day. In addition, the development of the project provides employment opportunities to the local workforce, which helps fuel the local economy.

“People want to see their municipalities not only be cost efficient in energy but also make an impact on the well-being of future generations,” David R. Mayer, mayor of Gloucester Township, shared in a township press release. “And in Gloucester Township we strive to align economic objectives with community values while improving the environment at the same time.”

Similar to Melitta’s effort, the transition to solar power also created a positive impact on Gloucester Township’s environment. They estimate the 10,566 solar panels will save 3,179 tons of carbon dioxide per year, equivalent to what 79,706 trees could offset.

Marina Energy also points out that due to the availability of net metering, businesses can significantly reduce their electric utility costs by generating their own electricity through solar installation and crediting it against their electric bill. It also provides predictability for the cost of energy for a business over time, which Marina Energy says cannot be promised by any other electric utility or energy provider.

Ultimately, businesses that invest in renewable energy are part of a larger movement where triple bottom line companies are redefining what success looks like for a business as a whole. They’re also securing stability for themselves and their community for years to come.

“This virtuous framework recognizes that a business that cares about the well-being of its customers and the environment will itself thrive in the long run,” says Lawton. “The triple bottom line creates a cycle based on stewardship. Keeping the environment safe and clean creates communities where people want to live and supports more resilient local economies.”