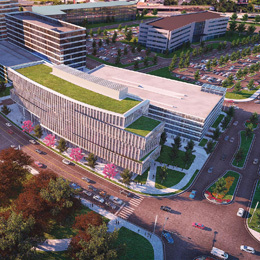 Like many cities around the country, a decade ago, Camden was a very different place, but deeply committed legislators, community leaders and businesses have been working to change that. “What we are seeing now may be new to some people, but for those of us who have been working in Camden for some time, for those of us whose institutions have been invested in the city, this is the result of a lot of planning and commitment to the city,” says Michael Sepanic, associate chancellor for external relations at Rutgers University-Camden.

Existing infrastructure
While there has certainly been a shift toward urban living, Camden has made a concerted effort to solve some of the city’s problems and promote a new vision for those who live and work there.

“I think things that have fueled the momentum have been increased public safety, state incentives that have been favorable for business growth and the anchor institutions like Cooper, Rutgers and Campbell’s Soup that continue to thrive and expand … are probably the three most important things that contribute to this,” says Adrienne Kirby, president and CEO of Cooper Health, which has been based in Camden for 130 years.

A newcomer to the Camden business community, Vice President of Development for Brandywine Realty Trust, Brian Berson says the company was attracted to this area by the capability to partner with Campbell’s Soup Company on Knights Crossing, a 70-acre mixed use commercial development project. “I think one of the best things going forward is that some of the trailblazers have already come and done deals. … Holtec, Subaru, American Water, Conner Strong & Buckelew, NFI. … All of these companies taking advantage of the taxes have blazed a trail for the other ones who may be more intimidated by Camden’s stigma to come behind them,” he says.

Kirby says Cooper has worked with many of these businesses as they moved into Camden. “As we look at the area around Cooper, we’re very excited about the opportunity to work with other commercial partners to really develop great restaurant opportunities, retail opportunities. … Those things really exist because of the base of people we bring into the city every day,” she explains.

Expanding the footprint
Cooper itself has made expansion a priority over the last decade with projects like the Roberts Pavilion in 2008, Cooper Medical School of Rowan University in 2012 and of course, the MD Anderson Cancer Center. So too has Rutgers with the opening of the Nursing and Science Building which just opened next to City Hall.

These kinds of big construction projects provide visible evidence of a changing ecosystem in the city. “It completely changes the way the entry to the business district looks,” says Kirby. “I think that’s important when businesses come into a community, they want to see that there’s something thriving there.”

Berson echoes that sentiment, saying, “That’s what you really need. You need those first decision makers, those market movers. … I think there are a lot of people on the sidelines waiting to see what happens and what works.”

Those who are taking that wait-and-see approach should keep their eyes on the next phase of development, which includes the new Joint Health Sciences Building, which aims to connect the Cooper Hospital campus with the Rutgers-Camden campus and create an “eds and meds corridor” to bring increased foot traffic. In 2012, the Rowan University/Rutgers- Camden board of governors was formed to encourage collaboration between Rowan and Rutgers-Camden in the area of health sciences. “This building is going to be the physical manifestation of that collaboration,” says Sepanic. “Competition is healthy. It’s not just good for our institutions, it’s good for South Jersey. What’s also good for South Jersey is for us to work together in areas where we can complement each other’s strengths.”

Community engagement
Of course, when we talk about re-envisioning a once troubled city, we can’t ignore the issue of gentrification. When new developments, businesses and residents are juxtaposed against those with longstanding traditions in the community, it is like two worlds colliding and the process is not always easy. Everyone who commented for this article shares a serious commitment to making the new vision for the city of Camden a positive force, newcomers and entrenched citizens alike.

Brandywine executives meet monthly with Mayor Dana Redd’s staff to work on community engagement projects. “Our goal is not to blow in, make money developing real estate and blow out,” says Berson. “We’re there for the good of the community. As the community improves, thereby will the value of our real estate. You can’t sharp shoot in a place like Camden. You have to jump in with both feet.”

Cooper has been a leader in these types of initiatives, working with secondary schools and nonprofits to create job training programs so that the city’s residents can take advantage of the job opportunities that new businesses bring with them.

“Our initiatives encompass not only the health care aspect, but housing, safety, employment, education, recreation, these are all part of creating a happy community and being healthy,” says Kirby. “A community will never reach its full potential if all of these things are not considered. It’s not about changing the city so much as bringing it to its full potential,” she says.

Sepanic touts Rutgers also has its eye on helping Camden families develop career skills and making sure local youth have access to higher education. Its Future Scholars Program pairs high school students with those already attending college to get them acquainted with college life and works with families to help them understand how to deal with the application process, financial aid and other red tape. In addition, the school’s students, faculty and staff spend more than 432,000 hours annually on community service, mainly in the city.

“For growth to be sustained, it has to be something that everyone is collaborating on. It can’t be superimposed from the top town,” he says. “You have to be working together with families, community organizations, government, corporate partners. … These things all have to happen at the same time in order to help raise a community up.”

Maintaining momentum
Much of the recent growth in Camden has been fueled by tax incentives made available to Garden State Growth Zones through the Grow NJ program. That’s set to expire in summer of 2019, just two years away. “What we wonder is … will there be enough momentum that you can reduce the efficacy of this program and still have momentum in the marketplace,” Berson says. “I think that’s the question everyone is asking.”

“I think we’re going to be attracting more corporate partners into the city. … More folks are going to come into serve those employees, more retail will follow,” says Sepanic.

Kirby agrees, saying the continued expansion of the eds and med sector will bring other businesses into the community as well. “I believe we’re going to see housing expansion and the value of the land and the community come up,” she says. “It’s going to be a totally different story in five years than it is today.”

If the next five years mimic the last five, that vision is more than feasible. Only time will tell.